Among the Early Ones 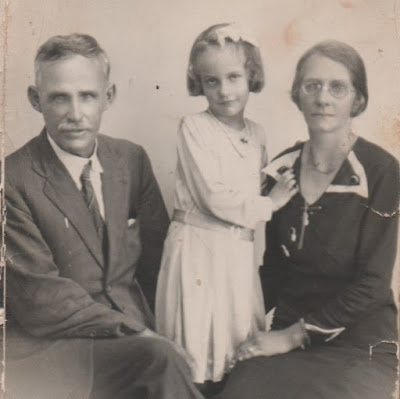 My Father, Joshua Watts Waldeck and my mother, Catherine Waldeck (nee Pearson) lived on the Greenough most of their lives. My Grandfather, Frederick Waldeck was one of the first missionaries to settle on the Greenough.

They lived on a farm there called Mt Pleasant and brought up their family there. My Grandmother on my mother's side was the first white woman to land at Champion Bay near Geraldton. My Mother being a babe in arms at the time. Later they went to Greenough to live.

My father and mother were married on the Greenough in the Methodist Church before it was quite finished, the floor was not nailed down. They also lived on the Greenough and raised their family there. They had thirteen children, but some of them died in early years. When I was quite young my father went north and took up land fifty miles N.E. of what is now known as Mt Margaret, a gold town which was found many years later. We travelled by covered wagon over the many miles that used to take three weeks, sometimes longer than that.

This was wild country and plenty of wild natives, which made Father's life very hard for often we were robbed of our stores by the natives and they often killed sheep and cattle.

Our home was a mud bat(?) place that father built.

One of my brothers was killed by natives, speared through for no reason.

Being children, we all enjoyed these trips to and from the station. Pull into camp at night and make big fires and watch dad make big dampers and cook them in the ashes. I remember once he forgot to pack his frying pan to cook on. To mother's surprise she got fried chops for breakfast, he washed and scrubbed the shovel and fried chops on that.

When we reached home often our home would be surrounded by natives in war dance. However, after many ups and downs and rough living for mother, we being young, knew no fears and had no worries.

We lived on mostly tin food such a tin butter, no milk those days, brown sugar and many other hard ways.

At last gold was found at Mt Magnet and of course that brought people of all kinds, then railways. Then gold was found all round us: Paynsville, Sandstone and other places. My brothers joined in the search with the rest. I have lots of happy memories of a lot of this life and of course, during this time we were growing up and enjoyed the work and fun of shearing time, helping muster cattle and sheep.

It was at Paynsville I met my late husband Harry King. He was from Queensland. Sixteen years old and I being fifteen, I was sent off to Collagehile Harry worked on the State battery with his Uncle (Mr Squires).

I went back to Greenough to school. Later mother had to return to Greenough with the younger children for school. Time went on and father put a manager on the station and he went back to the Greenough to work the farm. His father had died and my dad bought the old home and farm. We all lived there till each one got married and each girl of the family was married in the same church that Father and Mother were married in, and where Grandpa taught Sunday School and took the Service.

I was married on 17th July 1907 and went from there right up to Lake Darlot, a place where there were few women. One lived near me and the small town was five miles away. It was a lonely life after coming from a big family, but we had to make our own fun. Mostly tennis on Sunday.

Lake Darlot was a gold mining town. We lived there for eight years. Four of my children were born there and they were years of hard battling and often short of food. It was when my fifth child was born I went back to Greenough for a short stay till Harry found a job, which he did at Lawlers. Though we had many friends at Darlot, it was not hard to leave as there was nothing much left.

We started off at Lawlers with Rob a baby. My sister saw me on the train one night at Geraldton. I had three boys and a girl. The eldest boy six and a baby three weeks. Shall I ever forget that journey? My sister kindly told me I only had a few minutes to change trains at Mt Margaret to catch the one to Sandstone. Can anyone imagine me, it was night, all children asleep. First I woke the two eldest and took some luggage out and sat them on it, threaten them not to move or cry. A couple more trips into the carriage for more luggage, etc, then another boy and then the girl whom I was sure would yell them for small things, and the baby. I looked to find the tea room closed and me, just exhausted and sat to wait for the coming of the Sandstone train. Can anyone just imagine my relief when someone touched me on the shoulder as I sat among my kids and luggage and said: "Lady have his cup of tea you have earnt it". I could have hugged the man, in fact there were two of them, they had been watching me and were amazed to see what I brought from the carriage. Little did they know how scared I was for fear they would all cry. Anyway, they had a fresh cup of tea made for me and I can say I got plenty willing help to get settled for the rest of my journey, which took all night. They brought cakes and eats for the children. That was a long hard trip and my last from Greenough for many, many years.

We settled at Lawlers and made many friends and raised the rest of my family there, eleven in all. We had very happy times there, also a few sad ones. In the very wet season, we and all our friends often had the shortage of food as the wagons and later trucks could not cross the running creeks and boggy roads, but we all shared alike and helped one another. It made up for the hard times when the weather was good. We lived at Lawlers for fifteen years, and happy years too. But alas, that place went down and different ones left for want of work.

Now the place is worse than a ghost town. Nothing for a ghost to live in. So at the advice of Mr Troy we took up land at Mollerin. Another quiet place with few people. Our land was nothing but timber that Harry and the boys had to clear before we could grow wheat. We went to Mollerin in 1929. Went through the depression and poor crops and low prices, but still battled on. Plenty of ups and downs. Our family growing up all the time. The two older boys struck out for themselves.

After a few years Harry's health began to break up. to my mind due to hard work. We made many friends there, the boys followed cricket and football.

In 1936 Harry took ill and I brought him to Perth and to hospital where he spent the last three to four months of his life. He died on 12 October 1936.

The two youngest of the family were very young. I was left with the family and nothing but a poor crop but no cash. It was hard and sad, but Gods will. At first I didn't know where to start or if to start, but I had to think of the children who were unable to do for themselves.

That was twenty-five years ago, a long time ago and much water has passed under the bridge.