The Shooting of May Wain 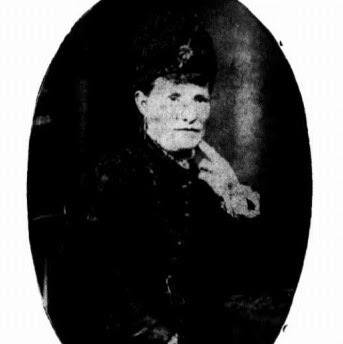 There was very little violence involving fire-arms during the infancy of the eastern goldfields and nothing resembling the gun-happy American Wild West. It was very rare for there to be any reported violence against women. However, there are always exceptions, as in the case of May Wain.

May Jane Wain was a 'handsome forty-two-year-old widow' who, early in 1896, was working as a barmaid in the Coolgardie Hotel. This experience taught her that one of the best ways to make money was by selling liquor. She left her job and set up a wayside 'cool-drink' shop, or sly-grog shanty, 10 kilometres out on the old road to Menzies.

Nearby, there was some mining activity at Mount Burges, also known as the Six-Mile. This location ensured some local custom as well as passing trade.

May lived alone in her three-roomed canvas and iron building with a bough-shed at the rear. She used the front room as a living room and shop and the two rear rooms as her kitchen and bedroom. A large portrait of a young kilted man hung over her bed. 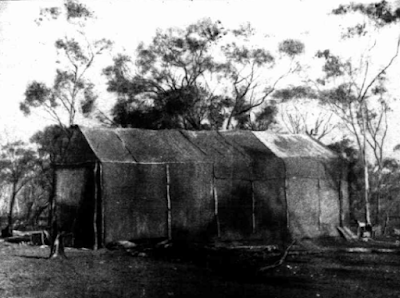 On 2 May 1897, just before midday, two men in a sulky drawn by a grey horse left Coolgardie and set out on the road to Menzies. The owner of the vehicle was Jim Connolly, a tall, dark, thirty-year-old Irish-American with deep-set eyes and a black moustache. A contemporary said Connolly had been "knocking around the 'fields for a couple of years" and was an inveterate gambler. He always carried a revolver and one night fired it at a large electric light globe in Hunt Street. It seems as though Alcohol excited him. One day, while travelling by train drunk, he climbed out of his compartment onto the roof. He walked along the top of the carriages until he reached the tender. He then pelted the engine-driver and the fireman with lumps of coal.

Robert Reid was a very different sort of man: short, stout, older than Connolly, with a gingery moustache and hair. He was a quiet and steady person. He had not long returned from a prospecting trip to New Guinea and was recovering from a bout of typhoid fever. The two men had been staying at the Great Western Hotel before their departure. The proprietor, Henry Trevena, later observed that Reid did not associate much with Connolly while staying at the hotel. He made arrangements to travel Connolly as far as his brother's condenser, a few kilometres out of Kunanalling. Trevena also noted that both men had been drinking heavily before setting out, and Reid was 'properly muddled'. Reid 'did not seem to care what was going on around him'. 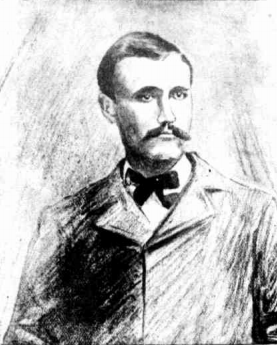 A teamster named James Hughes was travelling ahead of Connolly and Reid and reached the Six-Mile before them. Around 12.30 pm he pulled up his team across the road from May Wayne's establishment. He had a drink there, only staying for a few minutes. He then went back to his wagon to continue his journey to Menzies. He saw Connolly and Reid pull up outside Mrs Wayne's shanty, arriving from Coolgardie.

Shortly afterwards, Hughes heard a rifle report which startled his horses. He was busy trying to control the animals, so he did not see what was happening. Another shot rang out, and he heard May Wayne shout, 'I'll report you!' A third shot was fired, followed by a scream.

Hughes ran towards the shack as May Wayne stumbled towards him. Before she could reach him, she fell to the ground. Hughes saw blood coming from her right arm and chest. He noticed the two men driving away, the tall man on the near side holding a rifle. A neighbour, Jack Pullen, had also heard the shots and the scream and came running to the scene. He also saw the men driving away in the sulky and called out to them, but received no answer.

Hughes went to a nearby house for help. By the time he returned with the neighbours, May had dragged herself into her home, collapsing on the bed. When asked what had happened, she was unable to answer. An urgent dash was made to seek medical help and to inform the police in Coolgardie. However, before help arrived May Wayne had died. The bullet had gone through her right arm, entered her chest, and damaged the heart.

About 3 kilometres further down the track, Connolly and Reid came across Goolam Russool, an Afghan with his camels. According to Russool, the men called to him to get out of the way. After driving past, the taller man turned around and fired at him. The bullet went through his turban and then hit and killed one of the camels. The owner of the camels, William Britnall, was nearby. As soon as he found out what had happened, he set off after them on a camel. He caught up with the men at Kunanalling and pointed them out to Constable Harris. Reid gave his name to the Constable, but Connolly said that his name was James Edwards. The Constable examined Connolly's rifle and found eight or nine ball cartridges in the magazine and an empty cartridge in the chamber. He returned the gun, and the men went on their way.

Later in the day, Inspector McKenna and Sergeant Sellinger rode into Kunanalling looking for the killer, or killers, of May Wayne. Harris joined the other law officers in the search. By the time the policemen reached the condenser, they had discovered Reid asleep next to his brother.

At first, Robert Reid's brother thought it must be a joke when Inspector McKenna arrested Robert Reid for the murder of May Wayne. After the inspector explained the situation, he turned to Robert and exclaimed, 'This is a nice sort of a mess you've got yourself into!'. Robert replied, 'All I know about it is that we drove up to the place'. He claimed that he did not know what Connolly had been firing at, 'It could have been a tree for all I know'.

The police reached the 42-Mile at 1 am and found Connolly fast asleep, with two revolvers in holsters lying nearby. The party was driven back to Coolgardie by Mrs 'Hastings-Scott who was returning from Menzies in a buckboard and pair, escorted by the two mounted police.

One of Connolly's friends, Dennis O'Callaghan, visited him while he was in the Coolgardie gaol and took him his meals. In return, Connolly told him his version of the May Wayne shooting. According to O'Callaghan, Reid had been driving while Connolly took the occasional shot at a crow or anything else he fancied. When they reached the Six-Mile, May Wayne came out and shouted, 'If you don't stop that shooting I'll report you'. Connolly fired a shot past the woman, to frighten her. He believed the only way it could have wounded her was by ricocheting off a stump. O'Callaghan vouched for his friend's innocent intentions. He claimed that he was at once fond and respectful of women: 'God help any man who insulted a woman in his presence, no matter who the woman might be. His only fault was that he was too fond of that accursed revolver. That was his only fault, but he was a real man otherwise and a great man in the bush'.

O'Callaghan's loyalty took a practical turn when he arranged to raffle Connolly's trap and horse to provide enough money to pay for his defence. He took a new white shirt and a blue-and-white spotted tie to the gaol for Connolly to wear at the preliminary hearing. O'Callaghan said later, 'The next day in court he did look nice and did not appear a bit worried about the case'. A newspaper reporter observed that Connolly appeared unconcerned at the inquiry. He stated that 'there seemed nothing criminal in his appearance, although he has a roving eye and is evidently of a passionate nature'. Reid, on the other hand, appeared rather anxious and kept his eyes on the magistrate. At the end of the inquiry, the two men were committed for trial on a charge of wilful murder.

Connolly was fortunate enough to acquire the services of Richard Haynes, a prominent criminal lawyer, while George Leake agreed to defend Reid.

Haynes made a successful application for the case to be tried in Perth. The trial began on 7 July 1897. Both men pleaded not guilty to the charge, and their lawyers were skilful in their defence. In summing up the case on the second day, the judge told the jury, 'Gentlemen, there is no doubt that the woman met her death as the result of a rifle shot fired by Connolly, and the question for you to consider is whether he had any guilty intent'.

After an hour's deliberation, the jury gave their verdict of 'Not guilty'. Reid and Connolly left the court to find a large crowd waiting outside: 'the people cheered lustily, and dozens of friends insisted on shaking hands with them, Connolly being carried around in triumph'.

The two men were wise enough not to return to Coolgardie where they would have been sure of a less than cordial reception. Little is known of Reid's movements after the trial, but Connolly was seen two years later working as a barman in Dawson City in the Klondike. The last mention of the man who killed May Wayne came from O'Callaghan: Connolly had led an expedition into some foreign country and never returned.