By Norma King, published in "Colourful Tales of the WA Goldfields", 1980 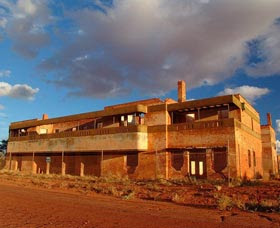 Ruins of the hotel.

Big Bell - what memories the name of that town brings back to those who once lived there! To some, it has nostalgic thoughts of homes left behind or sold for a pittance, for others, there are memories of good times and for a few a feeling of regret that a source of illicit gold-dealing is no more. Sadly, Big Bell only lives in memory now, as it is one of the towns in the Murchison district of Western Australia that died.

It had its beginnings in 1904 when an Aboriginal woman picked up a piece of rock and showed it to a prospector named Paton. He then found the lode that had shed the fragment of gold about 32 kilometres north-west of Cue. Paton worked his reward claim for a year until the values declined to such an extent that he abandoned it.

A year later a man called Scott discovered another small, rich reef nearby. He named his find the Blue Bell. Its values also tapered off, so he left.

Little other mining was carried out in the area until about 1913. John Schoberg and James Riddle took out a lease which later became a part of the Big Bell mine. The men became disheartened with the crushing results and towards the end of the year exchanged their property for a horse and cart.

The new owners, Chesson and Heyden, put up a ten-head battery and built up their treatment facilities. The mine eventually employed some thirty men. A little tent town sprang up around the workings. Chesson's sister, Mrs Freyer, ran a boarding house for the workers. Mail and stores were brought out from Cue.

Chesson and Heyden named their property the 'Big Bell'. Some say the name was suggested because of the orebody's closeness to the Blue Bell. Others claim it originated in 1904 when Townshend, who then owned Coodardy station, followed the peal of a Condamine bell ( the big bell hung around a horse's or bullock's neck) to the rise on which the mine later stood.

The two men ran the mine for ten years, during which it produced 341 044 grams of gold from 65 480 tonnes of ore. They closed the mine in 1923. Chesson said later that they were beaten by a shortage of water, mechanical troubles, and a limitation of credit - not because the gold had run out.

The leases were re-pegged in 1928 by Mr Mandalstam and his partner, Mr Paget. During 1928 and 1929 they put down seven bore-holes to trace the depth and length of the lode. The tests indicated a large, low-grade ore-body that would need a substantial amount of money to develop. Mandalstam approached the American Smelting and Refining Co. Ltd and in time the Big Bell Mines Co. was born, with the involvement of three other companies as well-American Smelting's subsidiary, the Premier G.M. Co. Ltd, the British Mining Trust Ltd, and the Terra Nova Pty Ltd. The Premier G. M. Co. of Canada, which had interests in Queensland, took charge of the project.

In November 1934 this company sent one of its former managers, Dale L. Pitt, out from Canada to take charge of the mine, which was still in the exploratory stage. Twelve months later the Premier G. M.'s managing director, Mr Doust, told shareholders at a meeting in New York that the company intended to go ahead with its Big Bell project in Western Australia. It had already cost half a million dollars, a figure that had grown to $1,220,484 by the time the mine was ready for production.

In February 1935, engineer Bull Sweeney began his work of designing and constructing a plant capable of treating 30 500 to 40 600 tonnes of 4.6-gram ore a month. Slim Summerville was in charge of underground operations. The Company employed several men on construction work during these Depression years. Unsuccessful job-seekers made camps from bags or any scrap of material that came to hand. They camped a distance from the mine near a well and called their little settlement 'Silver City'. It was supposedly named this because the combined wealth of its inhabitants amounted to just a few pieces of silver.

Early in 1936, the Premier of Western Australia, Mr J. Wilcock, signed an agreement with the Premier G. M. to construct a railway from Cue to the Big Bell lease. Mr Urbahns surveyed a townsite on a plateau 3 kilometres from the mine but, as the rabbit-proof fence ran practically through the centre of the planned town, it had to be built farther west. The first sale of blocks was held in the Cue court-house on 2 April, followed by a second sale two months later.

All was ready by 2 October 1937 for the official opening of both Big Bell and the railway. That was a day to remember! A special train carrying the Governor, Sir James Mitchell, Members of Parliament, and the representatives of business houses pulled into town early in the morning to the sound of band music, broadcast over loudspeakers.

The official welcoming speeches were given by the chairman of the Cue Roads Board, Mr A. Clarkson, and by the warden of the Murchison goldfields, Colonel W.A. Mansbridge. The Governor responded and granted the school-children a holiday. The train then exploded its way the 3 kilometres to the mine over detonators that had been placed on the rails. Sir James Mitchell officially opened the mine and the Minister for Railways, F. C. L. Smith, cut white ribbons stretched between the two girders and performed the ceremony of opening the railway line.

At 1 pm, more than 200 visitors sat down to a sumptuous nine-course luncheon in the messroom where 270 miners had eaten previously. Two men representing the workers attended the official luncheon, one from underground and one from the surface workings. The manager apologised to the employees for not being able to accommodate them all at the luncheon but had a special bar set up for them in the mine garage.

In the evening, a ball was held in the new Palais Theatre to aid the hospital. No expense had been spared in providing the town with this modern theatre and dance hall, designed by W. G. Bennett, the architect of Perth's Plaza Theatre. Aircraft had flown over other towns in the Murchison dropping thousands of pamphlets inviting everyone to the ball.

The hall was packed with formally dressed patrons who spent the evening dancing and watching novelty talking-picture shorts. Supper was served outside in a huge marquee. At about 10 o'clock the Governor and parliamentarians arrived at the ball and heard Dale Pitt declare the new hall open. The Palais' moment of glory was short-lived, as a few months later it was destroyed by fire. Another hall was built during wartime, but it was vastly inferior to the Grand Palais.

The second World War caused a manpower shortage at Big Bell, as was the case in most towns. As a result, the mine had to be closed temporarily in 1943. The Government provided a subsidy for empty houses to be kept in repair until they were needed again. The mine reopened in 1945 and residents began returning to their homes.

Forty-five men were employed that year, 314 a year later, and the Big Bell mine was in business once again.

Life at Big Bell, particularly in the post-war period, was far from dull. The centre of entertainment was one large hotel. It was an imposing, two-storeyed brick and concrete building where all sorts of interesting characters gathered. One was an unlucky card-player who walked in with a Mohawk haircut. He had been involved in a game of strip poker the night before, had lost everything else, and so clippers were run over his hair every time he lost a hand until all he had left was a thin ridge along the top of his head.

Our family lived at Big Bell during the town's last two years. One day as I sat waiting for someone in the 'Killing-Pen' (a central courtyard) at the hotel, a man came up and offered to buy me a drink. When I refused, he assured me that he could afford it and half pulled a roll of notes from a pocket as proof, whispering confidentially 'Gold'. It was my first meeting with a man who openly admitted to stealing gold. His wife occasionally flew to Perth on 'business', and it was common knowledge that she was disposing of stolen gold. When the time came for his family to move on, as we were all eventually forced to, the man was told that he would be unwise to look for work on any mine in Kalgoorlie.

In the 1950s the mine's gold values declined and, in spite of a subsidy granted by the Government in 1953, it was forced to close two years later. The Christmas and New Year festivities of 1955 lacked the customary enthusiasm, as work on the mine had ceased and the future was a matter of doubt for many of the miners and their families. Even the weather reflected the general low spirits, with constant rain. At the height of this distressing time, the creeks flooded and there were grave fears for the safety of a lost child. Those men still left in the town searched throughout the long wet night of New Year's Eve and fortunately, the story had a happy ending, as the child was found alive.

The story of Big Bell did not end on a happy note. The town gradually became deserted as families left to join their menfolk who had found work and homes in other towns. Little is now left but the remains of the hotel and signs of big mining development, a few kilometres away - lifeless reminders of a once-vital mining town.