Life in Quarantine in Parkeston Camp, 1919 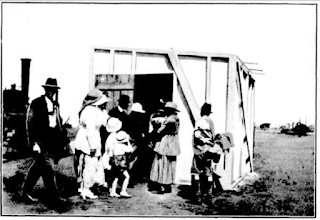 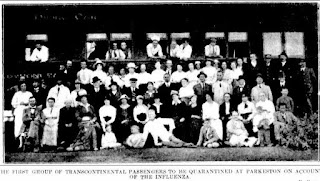 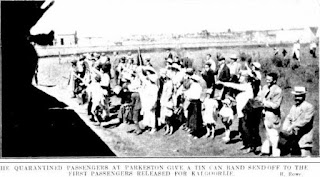 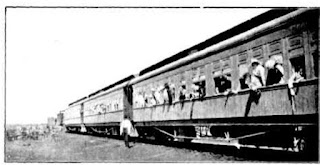 With our state borders closed and people being quarantined, we try to imagine what it would be like being forced to stay in a quarantine camp on the outskirts of a town or city. We probably imagine uneasy residents waiting for symptoms of some dreaded disease to appear. However, one news sheet that was published in 1919 gives us a much lighter picture of quarantine life in the Goldfields of Western Australia at that time.

The Allies and Germany had signed the Armistice of the Great War of 1914-1918 only a few months previously. While this war had taken an extremely heavy toll of human life, another enemy appeared and was killing people in their thousands.This was the Spanish Influenza and was to eventually claim more lives than those casualties from the whole four years of war.

The pandemic was first reported in Spain, then it spread rapidly through Europe and India, and finally to other parts of the world. Although there were some cases from incoming ships in the quarantine stations of the various state capitals, Australia remained free of the disease until January 1919.

The first cases in Australia were reported in Victoria. The following month, Western Australia took steps to protect its inhabitants from the dreaded Spanish Flu by establishing a quarantine station at Parkeston, 3km east of Kalgoorlie, for passengers coming in on the East-West Train.

The passengers on the third quarantine train had their own little newsletter called “The Yellow Rag” to help ease the tedium of quarantined life. Why did they call it “The Yellow Rag”? Yellow journalism or yellow press were terms used to describe newspapers that did little research and used eye catching headlines to increase sales. The content was exaggerated, scandalous and sensational. This publication was appropriately printed on yellow paper.

Judged by the tone of the newsletter, the quarantined travellers were a cheerful company who took very well to their hold-up on the edge of civilisation.

Volume 1, No 1 was registered at the APMG Camp on 7 February 1919 and sold for sixpence a copy. It was printed and published by Hocking & Co Ltd, Kalgoorlie for Mr J Meyer on Number 3 train of quarantine camp, Parkeston.

The Editorial, with the sub-title “Quarantine”, read:

“We landed here on Monday last, and here we are on Thursday. How fast the time goes. Tomorrow we take our departure, unless, in the meantime, someone of our number will be good enough to get sick. Unless one has been confined in Parkeston Quarantine Camp, he cannot appreciate the really beautiful location, the lovely soft, green lawns, the tropical palms, the spreading oak and gum trees and the beautiful hills in the background. The beautiful sun, and nature's lovely daughters, hot days and cool nights, and an occasional dust storm all combined with the aid of a plentiful supply of liquid nourishment from Kalgoorlie – to make our stay truly delightful ...

Cupid was terribly busy in camp and a number of inmates will perhaps, in after years, often recall the incidents of the camp life while sitting over the fire with their life partners, found in quarantine. The members of the train crew were indefatigable in their efforts to supply our various and numerous wants, and each and everyone did his best to make our period of incarceration a pleasant one.

On the whole, we have very little complaints as to our treatment. One day we nearly missed having any lunch, (no fault of the crew) but the parties at the stations responsible for supplying our needs could not be found.Apart from the delay and the resultant inconvenience, no one will suffer very much, while the experience will be looked back upon as a huge joke. At least we are pleased that on one else can be infected from the dread disease from this source.”

Among the contents of the newsletter were news and gossip items, weather reports, matrimonial bureau, trade and finance, amusement advertisements and a ladies column. Included in the latter we the items:

“Ladies, be careful when your order prunes at dinner because the men later take particular notice of the shape of your lips.

WANTED – Cotton Wool for ladies on Car No 1, to stuff in their ears. Proof against midnight yarns!!! Who sneezed and dropped the thermometer? What did the doctor say?

WANTED – A supply of dressing gowns for men going to the bath.”

In the matrimonial portion: “The secretary reports that the eligible men are very backward: in that there has been a large number of applications from married men, anxious to bespeak their 'seconds'. The ladies department reports that the fair sex is hanging off, waiting for leap year.”

In the Trade and Finance: "Malting Barley - Kalgoorlie stocks are low, and prices likely to advance, owing to heavy orders for malt products from Parkeston.

General – The Parkeston Spinning (Yarns) Co Ltd has been floated with a capital of 50000 pounds, Mr Joe Can-i-lie has been appointed general manager.”

Under the heading “Concert”, was written:

“Last night's concert was interrupted by an energetic willy-willy, who stole the upright grand. We hear that it eventually arrived on the other side of Boulder, and arrangements have now been made to have same posted back to Parkeston, in time, we hope, for the concert this evening, which is scheduled to begin shortly after 8 pm. Owing to this contingency, no piano choruses were resorted to, a very pleasant evening was passed and our thanks are due to the Misses Winzer, Allen, Bothwell; Messrs Kellock and Strongman; also the crew; but the latter we believe are dark horses for tonight's concert, which bids fair to excel anything ever started in Parkeston, Willy Willy excluded ...”

On the last page of the newsletter were words that were to be sung at the concert to the tunes of three popular songs of the day. The first was to be sung to the tune of “Pop Goes the Weasel”:

“I'm going to sing a song to you

About the Spanish Flu

And all the topics of the day

And different things we gone through

We left Adelaide one fine day

To go across the trans-line

And when we got to Parkeston Line:

Here we have to stay five days

To stop the flue from spreading

Don't know how we'll get on for grub,

We'll have to eat our bedding.

ON the day that we arrived

With the other train we mated:

But some cove started to shout aloud,

“You've got to be fumigated”

When we got in that awful place

The smell was something shocking:

We stayed there about ten minutes and then we started knocking.

“Oh, let us out!” the crowd would yell, or else you'll have us freezing.”

This effort was “specially dedicated to the passengers by Mr Ted Russell, of Number 2 Boob, in quarantine at Parkeston.”

waiting for the Flu

Talking of the Flu,

Dreaming of the Flu,

When “I heard they wouldn't let us through

Oh, how it did upset me!

All at once along came Dr Way,

Then he had his say,

Filled us with dismay,

“Can't let you through, tho no-one's got the flu

Health Board won't let me”

To the tune of “Three Blind Mice”

See where they stand

See where they stand

They both are waiting to be let through

Some passenger swear 'till they're black and blue

And other's drink whisky, or bill and coo!!

On the two blocked trains.”