By Norma King, First published in the Kalgoorlie Miner in 1979. 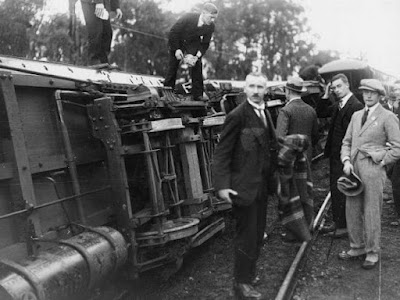 A tour of parts of Victoria and New South Wales followed, which included a visit to the site of the Federal Capital of Canberra. There the Prince performed the ceremony of laying the foundation stone on Kurrajong Hill for the national archives building.After leaving New South Wales the Renown turned south and then steamed along the coastline through gales and heavy seas in the Great Australian Bight until she reached Albany on June 27. The Prince then began his West Australia tour.

A great deal of planning and preparation had gone into this visit. The railway department had fitted out and furnished a special royal coach, as well as a similarly appointed coach for the ministerial party.

Four days before the Prince arrived on the Goldfields, these special coaches were involved in an accident. The royal party, Sir James Mitchell and other ministers were onboard for a tour of the South-West of the State. The train was travelling slowly from Jardenup to Bridgetown when the two special coaches at the rear of the train left the rails and toppled down a small embankment on their sides.

The train stopped and people rushed to the overturned coaches. They were greatly relieved to find that no-one was seriously hurt. Two members of the party got a few cuts and bruises and the rest, including the Prince, were unhurt. Rescuers found the Prince lying among the wreckage. He greeted them with a smile and said, 'That wasn't on the programme.'

As the ministerial coach suffered less damage than the other, it was used for the rest of the journey.

The young Lord Mountbatten perched himself on top of the overturned carriage, surveyed the wreckage and reportedly commented: “That’s the best thing I’ve ever been in.”

The train headed for the Goldfields after visiting Perth, and on the morning of July 9 stopped briefly at the Coolgardie Railway station. All the schoolchildren of the district were lined up in their best clothes. Herbert Frank was one of these schoolchildren and remembered that they all sang, "God Bless the Prince of Wales" to their royal visitor.

The weather was kind and it was a cool, clear, sunny day, 'fit for a king', or for a future king. As such, it was pleasant for those waiting outside the Kalgoorlie railway station for the train to arrive. About 3000 children were lined up in the big rectangular space in front of the railway station together with many returned soldiers, cadets, boy scouts and members of the Veteran Soldiers and Sailors Association. The Kalgoorlie Brass Band, under the baton of Harry McMahon, also waited with a choir of 500 schoolchildren. Local dignities waited on the station platform while thousands of people packed Forrest and Wilson streets. People climbed on any vantage point they could find.

At about 11 am, a pilot train led the royal train into the Kalgoorlie railway station. The Prince and his entourage stepped out onto a platform that was decorated with bunting and masses of greenery. The Prince, after the formal greetings, left the station and moved on to a dais outside and listened to the children singing the National Anthem. The mayor, Mr Ben Leslie, read an address of welcome and the Prince responded. In his speech the Prince said: "I have seen what a splendid record Kalgoorlie had in the Great World War. There was no great centre of population, which volunteered more readily than this ... I have heard with admiration of the pioneering pluck and engineering skill that has enabled a great city like this to be built in a country where water is so scarce. It is interesting to read of such things, but far more interesting to see them one's self."

The choir then sang “A Song of Australia”, after which the Prince and his party were driven through the main thoroughfares of the town. Crowds of cheering people lined each side of the route and crammed onto balconies and at windows. The streets, like the railway station, were decorated with bunting and flags.

The Prince and his party stopped at the Town Hall and had morning tea with the relatives of the soldiers killed in the recent war. The Prince then shook hands 'sympathetically' with each and every relative as they filed past him, but time prevented him from meeting all the women who had worked hard for the war effort.

The Prince then went to the Kalgoorlie oval. About 3000 schoolchildren had formed themselves to represent the word 'Welcome', while the Kalgoorlie Brass Band played appropriate music. The children then formed into columns and marched past the royal visitor. After their performance, the children received bags of sweets, fruit and some cool drinks while the Prince and his entourage left for a lunch given by members of the Chamber of Mines at the Caledonian Hall.

In the afternoon, the Prince belonged to the people of Boulder and similar scenes and events took place to those at Kalgoorlie. The Mayor of Boulder, Mr J.A. Rodgers and councillors met the Prince at the Boulder Town Hall. Among those returned soldiers presented to the heir to the British throne was 90-year-old Mr Morris, a veteran from the Crimean War.

The Boulder schoolchildren put on their display at the Boulder Recreation Reserve and formed themselves into a pattern, which spelt out the letters 'HRH'. The children were then given their treat while the Prince was already on his way to the Boulder racecourse.

He watched the Cornwall Handicap (the Prince was also the Duke of Cornwall) and the Prince of Wales Handicap from the member's stand and placed some money on Four Kings in the main race. The horse won easily. The widows of soldiers then had afternoon tea with him at the Boulder Town Hall, followed by a visit to the surface workings of the Great Boulder Mine.

The climax of the crowded day was a civic dinner in the banqueting room at the Boulder Town Hall. The royal party then returned to the Kalgoorlie railway station and boarded the Trans-Australian train for South Australia.

Mr Bruce Woodward, or 'Woody' as his fellow workers at the Commonwealth Railway called him, had been at the station all day. He was the driver of a pilot train and his task was to keep water and air pumped into the special Trans-train and to protect it from being boarded by over-enthusiastic sightseers.

The Royal party boarded the train while Woody ran his engine up and down to guard it on the other side. He stopped the engine briefly when a man dressed in an admiral's uniform came up to him and asked, 'Are you our driver?'. The engine driver explained his role in the proceedings and then Lord Louis Mountbatten, as the uniformed man proved to be, offered him his hand and asked him if he had met his cousin, the Prince. Woody told him he had not had that pleasure.

Later, when his engine drew level with the observation platform on the royal train, Lord Mountbatten introduced the Prince to Woody who wished him a safe and pleasant journey across the Nullarbor.

As the train pulled out to begin its eastward journey, Woody saw, what was for those days, an unusual sight. The platform was packed with people, mainly women and children. He said women began screaming and crying, 'We'll never see our Prince again,' and that some even fainted.

George Bennett (who later became a Member for the Legislative Council), was the conductor on the special pilot train that ran ahead of the Royal train. He said that if he had been a member of the crew on the Royal train, he would have been one of those three lucky people who the Prince had given a gold tie-pin. These pins had the Royal Crescent and three Prince of Wales feathers on top.

One of those who received a gold tiepin from the Prince was Jack Byrne. During his career as a steward on the Trans-train, he met many VIP's, but his first was with the Prince of Wales and was the most interesting. Jack described the special coach as "a sitting room that doubled as a dining room and at the end of this was the observation platform. At the other side of the sitting room was a corridor with doors leading into two A-class double bedrooms, a bathroom, a kitchen and four two-berth compartments. At the end was a compartment for two of us crew."

Jack Byrne said it had been a long day as he had been on duty since 9am preparing for the Prince's journey. At 11 that night, he had 'just flopped' into a seat in the sitting room before going into his quarters. He was idly turning over the pages of an album that showed photos of the construction of the east-west railway which had opened three years before. The Prince and his party had retired for the night so Jack was surprised when the Prince walked in. He, like Jack, was tired after a long and arduous day. The Prince asked the steward about his personal life and the two sat and discussed the recent war, sport and other general topics.

Both men were interested in horse-racing and the Prince gave Jack a tip for the Grand National Steeplechase that he had received by telegram from the owner of the horse in Melbourne. The horse won the race but Jack said, unfortunately, he wasn't able to put a bet on it.

The Prince of Wales, who later became King Edward V111 and then the Duke of Windsor, had stolen many hearts on his one-day visit to the Goldfields.

He was to have a chequered career and the people of Kalgoorlie-Boulder, like most of those who had met the Prince on his Australian tour, would have followed his life with interest. I was a young teenager in 1936 and remember the discussions, dismay and controversy that followed his abdication when he gave up the throne to marry Mrs Simpson, a divorced woman.

The Duke and Duchess of Windsor spent the rest of their lives as exiles in France. 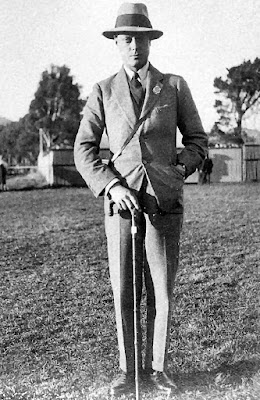