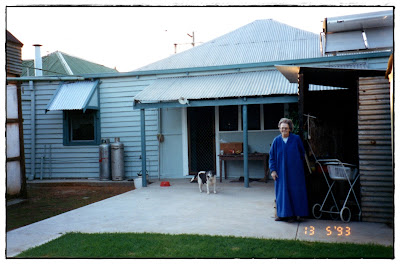 Gordon David and Florence May Wishart were the next owners of 40 Piccadilly Street, Kalgoorlie. Peter Wishart was also living with them, most likely Gordon's father. They all moved from 75 Brookman Street in 1946 or 1947. Gordon had a service station at 19 Cassidy Street which later became Kyle Motors.

Mr Gilbert lived on Piccadilly Street and advised Norma King that they made big changes to the house. They removed the bull-nosed, front verandah and replaced it with wide verandahs all around the four main rooms. The cellar had been filled in (partly with rubble and the date palm that had been cut down at the front) and the kitchen was built over it. The date palm rotted over the years and by the time Norma King moved into the property, the floor had a tilt towards the back. My Grandparents put jacks under the kitchen floor and slid two steel rods underneath and spanned them across the sinking area of the filled-in cellar. This helped, but a tilt remained towards the back wall support.

Around 1955, the post-master of Kalgoorlie, Richard James Williams and his wife Louis Sarah Williams purchased the property. He had retired so had to vacate the government property supplied to them. They were keen gardeners and turned the garden into something of a showcase. They also repainted the house and changed some of the decor. Unfortunately, Mrs Williams became very ill and had to be flown to Perth for specialist attention. They did not have enough medical cover for the cost of hiring an airplane or for the treatment. This forced them to sell the house and Mr Williams had to return to work as postmaster of Fimiston. They put the house on the market and moved into the Postmaster's house at Fimiston. Louis advised Norma King many years later that she couldn't bear to drive past the property as she missed it so much.

My Grandparents, Robert and Norma King, arrived in Kalgoorlie in 1955 and were living in a rental property at 38 Park Street. It was too small for their large family, so they were looking for something larger. They had eight children at the time. There were no large houses for rent and they were unable to get finance to purchase a property from banks. Fortunately, they were able to get assistance from the State Housing Commission and were able to choose their own house. They chose 40 Piccadilly Street and were obliged to repay the Commission within 20 years. My Grandparents discharged the Mortgage in October, 1978.

While living at the property, two of their daughters did their nursing training at the hospital over the road, others obtained scholarships to attend the School of Mines and the University of Western Australia, and the eldest daughter left for a overseas posting with the Diplomatic Service. One daughter got married at the house, and she and another daughter had their wedding receptions there. Norma's last child, David, was born while they were living there, Two years after David's birth, Norma developed health conditions which prevented much physical activity, so she began researching local history, writing, and art. Between 1969 and 1995 Norma published seven books and numerous newspaper articles. Most of her work was done in the house, including numerous interviews with people of interest over many cups of teas. These people were from all walks of life, including brothel owners, nuns, pioneers and former politicians. Norma learned how to type with the pain of her arthritis, and later wrote directly on a computer, a new technology of the time and very expensive. Norma was researching on the internet before it became the 'world wide web'.

Robert had a mining accident in Wiluna in 1943 and lost his right arm. Despite his handicap, he did a lot of work on the property. He built new cupboards, re-papered and painted the interior, filled in one side of the verandah to make more bedrooms, enclosed the rest and lined the 'sunroom'. He did all the gardening, chopped the wood and kept fowls and ducks.

Robert later had a stroke which resulted in some brain damage. He could speak, but no-one could understand what he was trying to say. Norma nursed him in the house for three years, after which he was admitted to the Permanent Care Ward in the hospital over the road. As a child, I recall watching fascinated as he rolled his smokes with one hand in the back room of the property. He was allowed home for a few hours each day and died in August, 1985.

Norma decided to leave the property in late 1997 to live near her daughter Zena at the Fremantle Village. She purchased a vacant lot at the park and chose to build a home that looked like a Goldfield's cottage. Her daughter Anne purchased the property, so Norma felt it was in good hands. She was able to stay at the property when visiting Kalgoorlie, so the ties with the house she loved and lived in for a third of her life were not fully severed. Anne still owns the property.