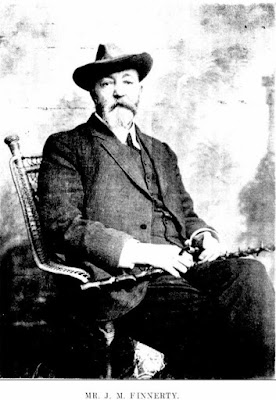 Of all the powerful and colourful characters associated with the State's mining history, none carried the same clout or respect than pioneer mining warden, John Michael Finnerty. He enforced law and order during all the major gold rushes of the late 1800s in Western Australia and was a revered figure. He was a big, strong man who cut an imposing figure with his blackthorn walking stick - an implement he always carried while on official duty.

He registered Arthur Bayley's reward claim for the discovery of gold at Coolgardie in 1892 and for Paddy Hannan's find that saw the birth of Kalgoorlie in 1893. People in Coolgardie thought so much of him they gave him the honorary title of "Landlord of the Golden Acreage".

Born in Limerick, Ireland on 31 January 1853. His father was Major Finnerty, who saw service in the Crimean war. His mother nursed alongside the famous Florence Nightingale. He arrived in Western Australia from England with his parents on the "Sultana" in 1859. He returned to England to complete his education at Rugby between 1867 and 1872. He was an average scholar, but he excelled at playing rugby and painting.

On his return to Perth in 1873, he was employed by the Chief Justice, Sir Archibald Burt as a clerk. This was not to his liking. The north of Western Australia was then being developed, so he decided to try his luck there. For a time he achieved some success in the pearling industry trading with Malaya, but he tired of this and bought an interest in a pastoral lease on the Gascoyne River with J M Monger. This partnership was dissolved in 1882 after several years of drought and the station was later sold. While there, Finnerty built the first brick house in the North.

After another trip to England, he was appointed Inspector of Police at Derby in 1886. The following year, at age 34, he was appointed Mining Warden and Resident Magistrate at Halls Creek. There he had to cope with the colony's first goldrush.

In 1889, following the proclamation of the Yilgarn Goldfields, he was sent to Southern Cross as Warden. There he married Bertha Mary Oats, the then 19-year-old daughter of Captain Oats, the Cornish manager of Fraser's Mine.

Finnerty soon established himself as a fair and like-able warden. When the Coolgardie gold rush started in 1892, he was in a good position to deal with the sudden influx of people and to settle the many resulting disputes.

During the next two summers, he saved many lives by persuading the Government to provide water tanks along the Coolgardie track and also by ordering diggers back to Southern Cross or return to the coast, allowing them to resume their claims after the winter rains.

After being officially appointed Warden in Coolgardie in 1894, he threw himself enthusiastically into planning the layout of the town. Development was rapid and exceeded all expectations, with some of the most substantial and impressive buildings in Western Australia being erected there. By the turn of the century, the local brickworks in Coolgardie was producing 40,000 bricks daily.

In 1895, the government authorised the building of a home for Warden Finnerty and his family. They had been living in tents at the rear of the present Government building in Coolgardie. The contractor of the house was Robert Bunning, founder of the present firm of Bunnings.

In 1900 Finnerty was appointed Resident Magistrate and Warden of Kalgoorlie, but he continued to live in his home in the "Old Camp" until his wife died in 1911. He resigned his commission the day she died and two weeks later he left the goldfields forever.

He was also a fellow of the Royal Geographical Society, a Freemason and President of the Coolgardie Liedertafel. With the rank of lieutenant-colonel, he commanded the Goldfields Regiment of the Volunteer Defence Force.

With his three children, (Elizabeth born 1893 in Fremantle, John Westenra in 1895 in Coolgardie and Aileen Salome in 1903 in Kalgoorlie) he went to Geraldton and settled on a farming property north of there known as Oakabella Station.

He died in 1913, aged 60 from blood poisoning caused by an infected carbuncle on his neck. He was buried in Geraldton.

Early historians said he was a champion of the small, independent diggers. "He had no time for the 'big guns' who made their way to the 'fields," said Coolgardie historian Jack Tree.

Tree recalled the story of three men, Breck, Gregg and Duggan, who kicked, robbed and garrotted a man who had just arrived in Coolgardie from Broad Arrow. Finnerty sent them to Perth for trial, making his recommendation on the papers to the trial judge. Beck and Gregg were sentenced to 15 years and Duggan 10 years.

During the "McCann Bogus Rush" a near riot developed in Coolgardie when a drunken prospector's reports of a new gold discovery were published in the papers, sending fellow diggers on a wild goose chase. The prospector led the party into the bush, but couldn't locate the gold find. The desperate diggers wanted to seek revenge on the Newspaper Offices for their part in causing the bogus rush. Using his powerful personality, he calmed the mob down and sent them back to their homes. He managed to whisk McCann out of town unharmed on a coach to Southern Cross.

Finnerty apparently had a fine sense of humour. When someone questioned him about the severity of a sentence given to a boot-maker, he replied that sometime earlier the boot-maker had made him "a shocking pair of boots" which had given him great pain over a period of three months and that it was not the boot-maker's turn to suffer.

On another occasion, there was also a young man in Coolgardie who made good sketches of prominent people of Coolgardie. His sketches were placed in McKay's shop window where they attracted considerable attention and amusement from the locals. One afternoon several men were standing at the window laughing and joking at a sketch he did of Finnerty. When the word was passed: "Here comes Finnerty", they all stepped back. The Warden had a very keen look at the drawing; in fact, he studied it for a few minutes and said "Huh." Holding his trusty blackthorn walking stick by the middle he walked into the shop and pointing to the window said to the shopkeeper: "Who did that?", McKay replied, "One of the boys did it and put it there," "What's his name? Where is he? Bring him here." was Finnerty's response. The lad had seen the Warden through the window and had done a flit out the back door. He was brought in and the Warden said, pointing to the window, "Did you do that?" "Yes sir," the boy answered. "Well young man, don't go behind that counter any more. Follow that up. That's your line. That's the best I have ever seen. Ha, ha, ha!" Apparently the lad took his advice and made good.

Finnerty's salary did not make any allowance for entertainment, though it was still expected of him. When Archbishop Riley was in town, Finnerty told his wife he would be bringing him home for dinner that night. She was dismayed as the stores had not arrived and all she had was a cabbage. A message then came through from Esperance that a Coolgardie resident had drowned. Remembering that the resident kept chickens in his backyard, Finnerty confiscated one 'on humanitarian grounds' fearing that the bird might die of starvation. The archbishop was said to have remarked that "it was indeed Devine providence."

With a small police presence in the area of the time, it is natural that at times people took the law into their own hands. John Drayton in "Smiths Weekly" (Magazine Section of the Sunday Times, Perth 11 October 1925, p6) recalls a few incidents where locals dispensed justice in a manner they thought Finnerty would approve of without involving him. They justified doing so as Finnerty was a busy man. Drayton suggested that Finnerty would take no action if he agreed with their response.

One example he gave was regarding the murder of a prospector known as Phil Mack out Margaret way. The local men decided it was not a matter for the court and shot an Aboriginal man they believed to be the murderer. They then hung him from a tree, advising Finnerty that he must have hung himself due to the remorse of killing the prospector. According to Drayton, Finnerty did not investigate the lynching. The account of the lynching and it not being investigated was also confirmed by N K Sligo ("The Murder of Phil Mack" Western Mail, Perth, 16 December 1937, p11). Sligo believed an Aboriginal assistant of Mack's mate shot the man who shot Mack after Mack's mate refused to do so. The men did not want the Aboriginal assistant charged for murder so they hung him from the tree and then advised Finnerty. Apparently, Finnerty thought this fair as a thorough investigation was not made into the lynching of the Aboriginal man.

Finnerty was able to maintain law and order with the limited resources he had, as he was well respected by the local population. Due to the lack of police presence in these early days, it was common for locals to dispense justice via "roll-ups". From our perspective with a large police force and judicial system, we may find it hard to believe the magistrate would not investigate major crimes such as lynching, but policing and social ethics were different at that time. He had the power to decide what was and what wasn't worth investigating, so if he thought the justice the local population dispensed was fair, it was easy for him to take no further action. Also, it must be remembered that at the time there was no telegraph system to send swift dispatches to and from Perth, no train to Perth for grievances to be heard in person, no municipality or mayor to voice the feelings of the community. He exercised almost sovereign power. When difficulties arose in the community, it was the Warden the community turned to, so he bore great responsibility and he was respected by the majority of the community for acting fairly.