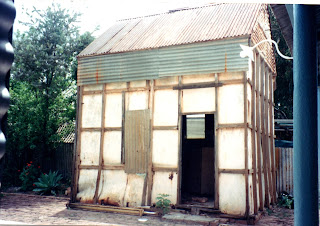 Edward (Ned) and Margaret Willis were the next owners of the house. They had one daughter, Dorothy. Ned was a butcher by trade and had a business in Lamington, on the corner of Peer and Hinemoa Streets.

Ernest Hocking, whose father was the original owner of the Kalgoorlie Miner and lived nearby, remembered seeing Ned driving his horse and cart down the back lane in Piccadilly Street. The name of the horse was Blackie.

On 13 March 1940, Ned's death notice was published and read as follows:

"The death occurred suddenly yesterday of Mr E. (Ned) Willis, a resident of the Goldfields for very many years. Mr Willis only recently relinquished active management of his butchery business in Lamington. He had not enjoyed good health for some time, but his end came with tragic suddenness at his home yesterday. He leaves a widow and one married daughter."

On 16 March in the Western Argus, there was an item headed "A Tribute":

"When Ned Willis heard of the death of his old friend, Paddy Bourke, he sorrowfully remarked, 'I have beaten Paddy by a lap and a half.' Exactly 24 hours after Paddy had been laid to rest the friends of Ned Willis assembled at the same portion of the Kalgoorlie cemetery to pay their last respects to Ned. Friends for over forty years, both had watched the growth and development of the Goldfields from the early days. Each was intensely interested in sporting activities and each was a fund of reminiscences of sporting achievements of the past. Both were true Christians and what we know as 'good living men', and the world is poorer for their passing."

As far as we are aware, Ned is the only person who has died at the house. He most likely died in the front bedroom, the room that my Nanna and Grandpa occupied for many years. No-one ever reported any ghostly presence there.

The butcher did live some reminders though. While digging in the garden, my Grandpa, Rob King, discovered a few old horseshoes and some butcher hooks in odd places, such as hanging on the trellis supporting the grapevines. There was a stable at the back of the block and next door to the stable a shed where hay for the horse's feed had been kept. A couple of the old floorboards were broken when my Grandparents lived there, and they discovered the cavity underneath was filled with old hay where mice had built their nests.

There was also a separate one-room building, they called the camp, to one side and near the back of the house which had an unusually high roof. My Grandparents guessed that this was probably where Ned hung and prepared the meat for his cutting cart. The camp was lined with flat-iron but had no covering on the outside. They used the camp for a time as a bedroom and then as a storeroom.

The pine beneath the floorboards finally disintegrated through an infestation of white ants and in 1994, the camp had to come down. My Nanna often wondered if the camp had been built on the framework of one of the original hessian covered buildings where Margaret Alderdice once nursed her private patients. 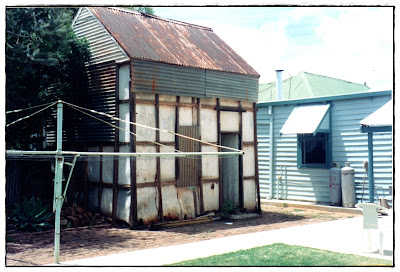 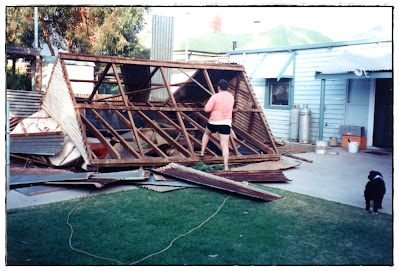 For about nine years after the death of her husband, Mildred was the sole occupier of the property. She then moved to Perth with her daughter, Dorothy Caust. Mildred died suddenly at her daughter's home on 8 June 1949.