The Lady at the Lime Kilns (Part 1) 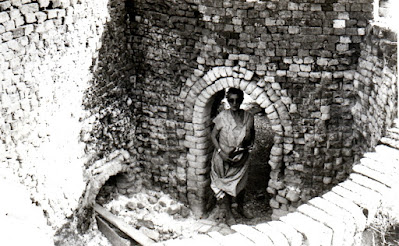 "My God! Where have I landed myself?" Jean Zuvela said this was her first thought when she arrived at the Lime Kilns near Naretha on the Trans-Australian Railway line. It was 24 March 1933, and the beginning of a 33-year involvement with an isolated and unique community - a community which produced lime for the mining industry.

In 1930-31, Charles and George Kiesey had discovered some good surface limestone a few miles west of the Naretha siding, which is roughly 360 km east of Kalgoorlie. They had also found a belt of timber in the vicinity, and as wood was needed for burning the limestone, the brothers set up their kilns close by.

The kilns were also conveniently situated near the railway line so that the finished product could be railed from there. This siding became known as either Lime Siding or the 913-Mile. (913 miles from Port Augusta).

Earlier, the German-born Kiesey brothers had been burning lime in the East Fremantle-Spearwood area and had brought some of their experienced workforces with them. These men erected their kilns at the 913-Mile with especially fired bricks from Clackline.

Lime is a necessary part of the gold extraction process and, until December 1965, the Keisey Brothers provided the gold mines of Kalgoorlie with an average of 500-700 bags of lime a week. For a few years, they also provided lime to the Government Railways for use in their water purifying plant at Rawlinna. The lime helped remove impurities from the mineralised underground water used in the steam trains.

When this article was first published in 2010, about 110,000 tonnes of lime a year were used by the gold mines on the Eastern Goldfields. This was supplied by three companies: Swan Portland Cement, Cockburn Cement and Loongana Lime. While these companies treat their lime by modern mechanical methods, the Kiesey Brothers used methods and equipment little different from the time when the Egyptians were building their pyramids.

Frank Trask, a lime producer in at Loongana who used coke from the steelworks at Whyalla to fuel his computerised kilns, describes the method used by the men at the 913-mile:

"Laying a kiln was a real art, as the fuel and stone had to be laid out so that there would be an even heat distribution. The coarsest stone would be laid on the hearth, which had cast-iron gates that ran over air channels which accessed to the outside of the kiln bottom. The stone would be laid in an arch over the wood, and then carefully built up alternating wood and stone until the kiln was full. The finest wood and stone was put on the top as a damper, and sheets of steel were put up as windbreaks should the strong wind blow the fire backwards! The burner would sometimes wait (at the 913-Mile) for a sea breeze or a south-easterly, which would be blowing up the grates, and the light it off ...

Running the old kilns took real skill and dedicated labour. It was not just in the laying and firing but in the selection of the stone and wood. The stone had to be hard slab from the surface of the Bunda Plateau. If the lime from the Nullabor Formation was quarried this particular stone decrepitated, or broke up, under heat. This would choke the kiln and put out the fire. The wood had to be gidgie or myall, which was a very low ash wood. It has the unfortunate property of having a high content of wood tar, and before it would settle down I understand that it would literally rain black tar around its downwind side. I have spoken to one old-timer who claims that Mrs Zuvela never put out a wash without checking the wind."

Jean, then Jean Strika, had come to the settlement as a housekeeper for her two brothers, Frank and Jack, and two other men. These were her fiancee, Mark Zuvela and Ralph Taben, who was to be the best man at her and Mark's wedding the following year. Jean and her brothers were born in Australia of Yugoslav parents. The other two had emigrated from Yugoslavia.

The four men, employed by the Kiesey Brothers Lime Supplies, had become tired of cooking and her eldest brother, Jack, had written and offered Jean the same wages as she was receiving as a cook in a private house in Fremantle. Jean said she accepted the offer as she thought it would be better being her own boss but did not fully realise the primitive conditions she would be housekeeper under.

Jean and another lady, Mrs Hales, who was bound for the same place, arrived at Naretha on the eastbound Trans-train at nine-thirty in the evening. Jack had driven to the siding to meet Jean and had taken her to the Lime Kilns in the company's T-model Ford truck. At the end of a 17 km ride in the dark, which 'seemed forever', Jean finally arrived at her new home.

This consisted of three rooms - a kitchen and two bedrooms. There was an open area between the two bedrooms, which was later roofed over and protected from the weather with a curtain made from bags sewn together. This could be rolled up during hot weather.

Three of her boarders shared one bedroom while the fourth camped nearby. Jean's bedroom had been specially built for her. It was sparsely furnished with a Coolgardie stretcher, a kapok mattress and a cupboard made of two or three stacked boxes.

The kitchen was also sparsely furnished. It contained a Number One Metters wood stove, a bench, a table, and a few boxes used as chairs. Jean said:

"I never had a cooler or even a safe when I first went there. Mark made me one later out of some 3x2 wood and fracture boxes. It was a square safe and the fracture boxes were put on the top with a bit of wood across the middle parts where I could lean plates and hang cups on cup hooks. That was my kitchenette and safe. I put two rows of four stacked jarrah fruit boxes together and hung a curtain in front. This was my cupboard for tinned stuff. Anything in packets I put in clean screw-top jars I had picked up in the bush. These had been thrown out by men who were batching."

Like most others in the settlement at that time, which was during the depression years, Jean had quickly learned to improvise. The settlement consisted of three other women and a dozen or so men. Later, the number of men employed at the kilns rose to about 22. In the earlier years, the nationalities were Yugoslav, Italian, English, Australian, Irish and Dutch. Later on, there were mostly Yugoslavs working there. While Jean could understand the Slav language, it was not until the 1970's that she learned to speak it herself. This was after her husband's nephew arrived from Yugoslavia and she helped him with his English correspondence lessons.

The morning after her arrival, Jean went outside to look at her surroundings. She saw ten or so buildings scattered around and towards the railway line, there were three lime kilns and some heaps of lime ash. The men were already at work near the kilns breaking up big chunks of limestone with heavy sledge-hammers. This method of breaking up the stone did not change over the years, as after a visit to the Lime Kilns in 1965, journalist Jim Magnus wrote:

"Strangers seeing a team of men with sledge-hammers pounding at great heaps of limestone, could be excused for thinking they had come on a relic of the convict days, with only the leg-irons missing."

The buildings in the settlement, like the one Jean had come to, had walls of filter cloth or hessian bags sewn together. Most were roofed with corrugated iron and a few with flattened kerosene tins. The dirt floors were covered with a type of cement made from a mixture of water and lime residues. Tanks of 44-gallon drums held each household's water supply.

There was no local supply of water for the whole settlement. Water was purchased in Kalgoorlie by the company and brought in by train. The tanks were off-loaded at the siding and taken by truck to the various homes where the water was siphoned out into drums or tanks. Each household paid for the water they used.