1905 Japanese Celebrations on the Goldfields 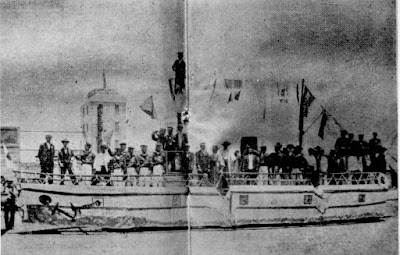 Although Chinese were not permitted to join in the gold rushes of Western Australia, some Japanese were allowed on the eastern goldfields in the early years. Many of the men established laundries as they did not work as miners.

Early in 1905, Kalgoorlie and Boulder held festivities to celebrate the fall of Port Arthur in the Russo-Japanese War. In Kalgoorlie, the Japanese organised a procession to be followed by a display of their national sports and pastimes on the Commonwealth Reserve.

The procession formed outside the Japanese club-room in Cassidy Street, opposite the reserve. Two mounted constables led the parade, and Mr John Boileau came next, preceding the Federal Band playing lively marching tunes and flanked by several torchbearers. Marching behind were thirty or forty Japanese followed by two big floats. One was a well constructed model of Port Arthur and the other represented a battleship. Three men on the ship bombarded the crowds of sightseers with paper bags of sweets, fired from the guns. This was especially appreciated by the small boys who swooped on them 'with surprising rapidity'.

The short procession was enjoyed by onlookers. The next part of the celebrations was long remembered by those who saw it.

The Japanese created a striking arch, which they built just inside the enclosure near the gates to the main entrance of the reserve in McDonald Street. The arch was covered with gum branches framing a design on a blue background surmounted by the words, 'We Celebrate Port Arthur's Fall'. A Union Jack and a Japanese ensign floated above the structure, which also incorporated a framed portrait of the Japanese Emperor. Festooned on each side of the arch were lines of American, British, and Japanese flags, mingling with gaily coloured paper lanterns. The other entrance to the reserve was graced with a similarly decorated arch, with a portrait of King Edward VII added. The scene was dimly lit by a few electric lights, specially arranged for the occasion. They were later described as twinkling with 'the uncertain lustre of fading stars'.

Towards sunset, people began to gather at the reserve. By the time darkness had set in there was a big crowd waiting for the entertainment to start. The crowd became restless with the delay and began to make their own entertainment. A group of young men near the entrance gates formed an impromptu choir, and they chose 'The Holy City' as a theme song. They sang the chorus with all their might. At the same time, several icecream carts, owned by Italians and 'Manila-men', were making a roaring trade on the reserve. The crowd's attention turned to one of the ice-cream sellers trying to make his way through to get more supplies. They playfully but persistently blocked his way. Finally, several young men of the 'choir' upset his cart. They drowned the unfortunate man's protestations with 'The Holy City'.

The Federal Band was heard approaching in the distance, and soon the mounted policemen passed through the north-western corner of the enclosure. Following them was Mr Boileau, the bandsmen, the Japanese marchers, and the warlike floats. It was not a smooth passage as the flagpole on the lorry carrying the model battleship struck the Mikado on the nose. For a moment it threatened to bring the arch down. The incident was a sign of things to come.

One of the Japanese organisers asked Mr Boileau if the band would open the evening's entertainment. The request was well received, but was on condition that the bandsmen might first refresh themselves with some beer. The Japanese directed them to a supply of beer in barrels in a near-by stand, only to discover that they had been drained by a crowd of bored youths. The youths had liberally dispensed the foaming liquid to all comers before the procession had started. This caused much jostling and pushing among the crowd. To prevent further trouble, the police turned the taps on and emptied the rest of the beer on the ground.

The thwarted crowd looked for another source of amusement and chose the thirsty bandsmen as their next target. Between 3-400 youths succeeded in scattering them in all directions. They then turnied their attention to pulling the decorations down and securing souvenirs. Seeing their plans in ruins, the Japanese retired to their club-room. They lamented the lack of opportunity to go through their exercises with the broad-sword, single-stick, bayonet, and so on. With nothing more to entertain them, the crowd at the reserve gradually broke up. By 10 o'clock the last straggler had gone home.

The celebrations at Boulder earlier in the day had been conducted in a more orderly fashion. The organisers anticipated the sort of people who would most likely attend, and planned accordingly. Early in the morning, the Japanese decorated one of the laundries at the corner of Burt and Brookman streets and stocked it with barrels of beer. They also erected an arch similar to the one in Kalgoorlie but bearing the words, 'Japan Victorious Over Russia. All Britishers Welcome'. The only other decoration they made was a 6-metre-long, rice-paper fish. It floated in the breeze, secured by a line to a post. At about 2 o'clock in the afternoon, the Federal Band entertained the people waiting outside the laundry. When the doors were opened, the crowd surged forward, As space was limited, they were admitted in relays. There was consequently no rowdiness or trouble at the Boulder celebrations.

It was observed in a newspaper afterwards that the Kalgoorlie fiasco could have been prevented if the festivities were held at the Kalgoorlie Recreation Reserve. Recently installed electric lights would have made 'the night like day', and the Japanese would have had a chance to present their unique entertainment.

Podcast: First published in "Colourful Tales of the Western Australian Goldfields" in 1980. Copyright now belongs to Lorraine Kelly. Please do not copy or reproduce without permission. #japanese #ColourfulTales