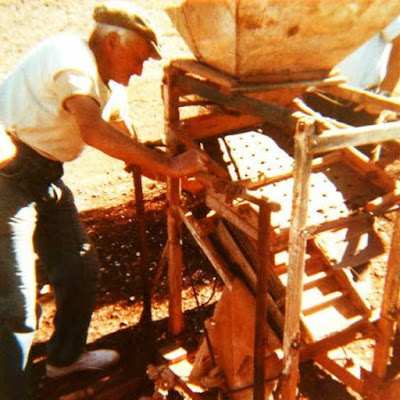 The following piece is taken from an article Norma King typed up (before she had a photocopier or computer!) from the Weekend News Supplement, September 1967. The article was called "Coolgardie - The Golden Years (author not noted.) His home is a nest of corrugated shacks like they never show in the glossy magazines - three miles up the track from Coolgardie where the pipeline swings away on its long journey south.

Some call him Dryblower Jack, but his real name is Jack Carins and he has lived 25 years in this lonely spot on the edge of Coolgardie Common.

He is perhaps, the last of the old-time prospectors and almost certainly the last of the dryblowers. Every day when the weather allows, he rides out into the bust on an ancient and mongrel bicycle and looks for gold.

It is a steady life. Eight hours a day at the "patch" and one hour off for lunch. At the end of a profitable day he may have a pennyweight or two of gold to show for his trouble and skill, or maybe just a tiny speck of colour in the corner of his biggest dish.

When the weather is unfriendly - dryblowing is not possible when the ground is wet from rain - he stays at home and enjoys a day of make and mend. Handy with the darning needle, his bombay bloomers are witness to many a rainy day spent in camp. If there is a piece of the original trouser left, he is no longer sure where to find it.

Jack Carins is 77 (in 1967), but a tough, upright and leathery 77 ... an old jackdaw who never throws away anything that may be useful later on. He knows many of his friends by the clothes they have handed on to him, so that old so-and-so has become the grey overcoat that hangs tied on the left along the nail pegs inside the front door.

The shack - he playfully calls it Belson and slaps his sides and chuckles gleefully when the joke is accepted - is built on solid ground. A brick path, the Causeway, has been carefully built around it, the edges trimmed with white quartz. The water pipeline passes the door and some kindly official - one rather suspects it might have been Coolgardie Shire President Jack Baker - has caused a branch pipe to be fitted so there is a constant supply of fresh water.

A garden and rubbish tip, a shed with most of a spare bicycle, and a couple of bush-walking wheelbarrows, and this is home to this old prospector.

But dryblowing is the special art of Jack Carins. He scours the bush for likely patches of colour, and, having found one, trundles his dryblowing shaker through the bush and goes to work.

He bought it, the shaker, from an old prospector in Coolgardie many years ago. It cost him $4 and still serves him well.

The shaker is a contraption of trays and screens, one above the other on a skeleton frame. There is a funnel on top and into this Jack Carins shovels crushings of likely 'values'. By shaking the devise by the handle, the soil is forced through a screen and the useless dirt is blown clear by a pair of bellows - one puff for each shake. The heavier (and possibly gold-bearing) dirt falls directly into a ridged tray. Here the gold is trapped.

The operation is completed by pouring the remaining dust from one tine dish to another until the dust is winnowed away and only specks of metal remain.

With no running water in which to wash clean their gold-bearing dirt, the early diggers turned to dryblowing as an essential trade. In the 1890's, there would have been hundreds of these men working at any time on Coolgardie Common.

Today (1967), only Jack Carins remains, an agreeable refugee from a bygone age of earth scratchers, a craftsman so skilled that the School of Mines in Kalgoorlie still takes its pupils out to the Common to watch him at work. The students,look on in awe as the old bushman stands at the shaker, engulfed in blowing dust.

"Maybe I'll keep at it for another 20 years," he says, "then it'll be time to look around and try some other game."

The following notes were written by Norma King after the article, I don't know what her sources were but I am guessing she met with him.

He was from North Country in the UK, born five miles from Newcastle-on-Tyne, two years almost to the day before Bayley found his nugget. He had his 21st birthday on a German mail steamer headed for Australia. Hi first job was clearing land for farms and firewood cutting. He first prospected during the Yilgarn rush about 1913. He was nearly always broke as a prospector. He went to war. Sometime after the war, he fell out with a mate and they walked off a mine which a man called Hayes took over. Hayes later sold it to De Bernales for 8,000 pounds.

Jack Carins survived without claiming a pension. He liked to sit on an old rug covered bed in the shade of some salmon gums outside his humpy, write bush ballads and muse about the good old days. There were skull and crossbones painted on his front door. Rabbit traps dangled from shrubs and tools were everywhere.

Jack said he would like to drop dead on his diggings. He died when he was 81 and is buried at the Coolgardie cemetery. After a bad bicycle injury near the railway crossing he was admitted to the Coolgardie hospital. After he discharged himself, he wrote a letter to his sister in England and then blew himself up with a stick of gelignite.