The Amazing Escape of Modesto Varischetti - Entombed miner in 1907 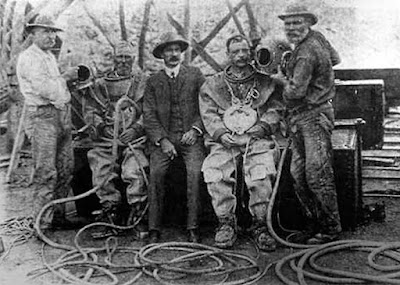 The eastern goldfields of Western Australia have an average rainfall of only 25 centimetres. Drought is broken every few years by torrential rains. In February and March of 1907, the goldfields were soaked by heavy rains. There was flooding in the Coolgardie-Kalgoorlie area and in the north country.

The road from Leonora to Lawlers was nearly impassable and most of Moore's hotel, built near a creek at Malcolm, was washed away. The Moore family was forced to spend one night on the roof of the two remaining rooms. The rest of the building was later found scattered along the banks of the strongly running creek.

A few kilometres away at Bummer's Creek, Mahommed Russool's 'beautiful vegetable and fruit gardens' were swept away and the owner's living quarters destroyed. Farther to the south, water ran into the Niagara dam, filling it to a depth of 5 metres.

While these events were taking place in the northern fields, a much more exciting real-life drama was being enacted at Bonnievale, a little mining centre some 11 kilometres north of Coolgardie. A local storm passed over Bonnievale at about 4 o'clock in the afternoon of Tuesday 19 March. The area had previously received 5 centimetres of rain. This resulted in a large volume of water to fill the Vale of Coolgardie shaft. Fortunately, no one was working there at the time.

Water also found its way down an old underlay shaft of the Westralia and East Extension mine. Water and debris began filling the main vertical shaft, stopping the skips. The twenty or so contract and wages men were quickly alerted and made their way to the surface. When heads were counted, they became aware that Modesto Varischetti was missing. He had been working alone on the Number 10 level in an 8½-metre rise. His chances of survival seemed slight, as the water had reached the Number 9 level. Experienced miners thought that the rising water might have compressed air in the rise where Varischetti was working, keeping the water back. There was a chance that he might be alive. 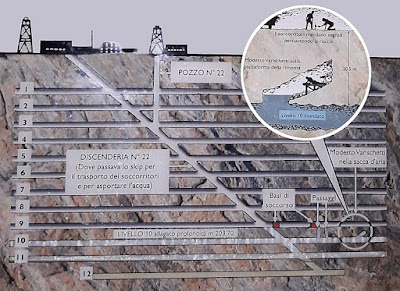 Mines Inspector Crabbe arrived from Coolgardie and worked out where the rise was situated. Repeated knockings on a rock above the rise brought an answering knock, a sign that Varischetti was alive. By late that night the shaft had been cleared out, and the skips began bailing water, estimated at 4,500,000 litres. A pump was needed to take the water out quickly, but none were available at any of the mines in the district. However, the Coolgardie Pressed Brick Works sent their Worthington pump to the site. It was capable of pumping 22,730 litres an hour.

Fortunately, Varischetti had been using a machine which had a compressed air-hose attached, and the fresh air it provided was enough to resist the water. This also gave him fresh air to breathe.

Inspector Crabbe estimated that it would take about ten days to lower the water sufficiently to release the trapped man. Therefore, they would need divers to bring food and other necessities to him during this time.

On Thursday 21 March, Crabbe sent a message to Mr H Gregory, the Minister for Mines in Perth. The Minister quickly arranged for a special train to take divers and equipment to Coolgardie. The train left Perth at 3 pm on the same day. On board were two divers named Hearne and Curtis, two assistants named Stewart and Johnston, and their diving equipment. The journey took 13 hours. This was a record which held for fifty years until diesel trains replaced the steam trains.

Meanwhile, two Kalgoorlie miners who were also divers, arrived at Bonnievale to help. Their names were Hughes and Fox. Frank Hughes had at one time been a professional diver for the Queensland Government and a master for dredges in that State. By the time the Perth divers arrived at the mine, Hughes and Fox had studied the plans of the underground workings. As they were familiar with the mining conditions, it was decided that they should go down. 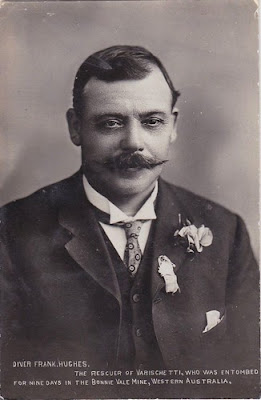 Fox injured his leg in the first descent. With Hearne's help, Hughes made exploratory dives. On one dive, he walked along the Number 10 level and shook the air pipe. An answering shake indicated that Varischetti was still alive. That afternoon, Hughes finally reached Varischetti who must have felt relieved when he saw the divers' heads loom up out of the water. They passed an air-tight container filled with food, candles, and matches to him.

Hughes visited Varischetti daily, taking dry clothes, tobacco and food, but sometimes water seeped into the containers and damaged the contents. Hearne helped Hughes on these excursions by easing air-hoses around corners and ensuring they did not become caught on obstructions. Curtis took care of the equipment and controlled the air pressure.

A daily report was given to the crowd who gathered at the top of the shaft. On 26 March, they were told that Varischetti had 'half a fowl, two pounds of ham, one tin of macaroni, bread, potatoes and two bottles of diluted claret'. Maringoni, the contractor who employed Varischetti, sent the trapped man written messages of good cheer every day.

As the days went by, the news headlines made the world aware of the drama taking place at Bonnievale, and the divers began receiving many congratulatory messages. One telegram sent to Hughes read: 'Kindly accept Melbourne Candle Starch and Soap Workers' Unions appreciation of your brave efforts in attempting to rescue entombed comrade'.

One newspaper recalled a similar event at the Hustler's Reef mine in Bendigo on 13 December 1873. John McGaviston, the shift boss, was rescued after being trapped for 26 hours. However, for Modesto Varischetti, it was a nine-day ordeal until the water was reduced sufficiently to bring him to safety.

Late in the afternoon of 28 March, Hughes went underground dressed in ordinary clothes. He walked waist-deep through the water along a drive on the Number 10 level. On reaching the rise, he sat and smoked a couple of cigarettes with the nervous Varischetti to help calm him.

Varischetti then stepped down into the cold water, but his legs soon gave way. Hughes carried him along the drive. Hughes later wrote: 'When I reached the pass, Tom Hearne was there and did his work like a Briton. I put Varischetti up the shoot, and Hearne pulled him through'.

To lessen the shock of emerging into a noisy, bright world after his days in the silent darkness of the cave, Varischetti had his ears stuffed with wadding, and he wore dark glasses. As the skip reached the surface, the Union Jack was unfurled from a mast on the poppet-head, signalling that Varischetti was safe. The waiting crowd was quiet until Varischetti was driven off in a cab. They then all cheered, and everyone tried to shake the divers' hands.

The reporting of the successful rescue in the Newspapers captured the imagination of the public. Accordingly, the affair was not allowed to end at this point. In Coolgardie, the district marked the occasion with a 'great celebration' in the town hall. When Frank Hughes went to Perth for the Fire Brigade Demonstration, he received a 'great ovation' from 15,000 spectators. The Italian Consul gave a luncheon for Varischetti and the State's Premier in Perth's Palace Hotel. The wife of the Governor of Western Australia, Lady Bedford, invited Hughes to Government House and later a Divers' Testimonial Fund was opened.

Kalgoorlie's Municipal Council honoured the three divers, and their assistants with a civic reception held in their chambers at 11 am on 4 April. In the evening the divers gave an exhibition of their methods in Kalgoorlie's Municipal Baths. School children were later given free diving demonstrations at the same venue. At a Sunday concert held in the Cremorne Theatre, Frank Hughes appeared on stage in a diving suit for the 'delectation of patrons at the concert'. He was asked to go on tour but refused the offer, as he was tired of all the publicity by then.

The rescuers also received some tangible rewards, the most practical being a purse of sovereigns donated by the Italian Society. The divers each received a gold watch and solid gold medals, made by the Boulder firm of Mazzucchelli and Downes. Inspector Crabbe was given a gold sovereign case, and Hughes' wife received a pendant with an inscription on one side and a photograph of her husband on the other. The Varischetti rescue has never been forgotten on the goldfields.

Even today, the mention of Bonnievale will always trigger the memory of someone who knows the story of Modesto Varischetti's amazing escape. 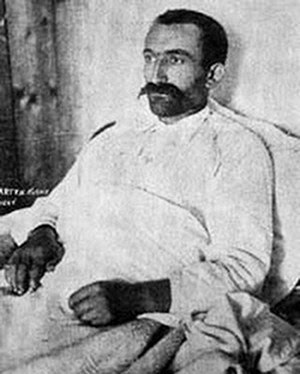 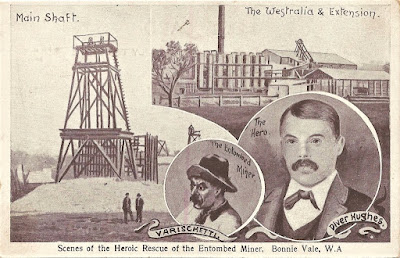