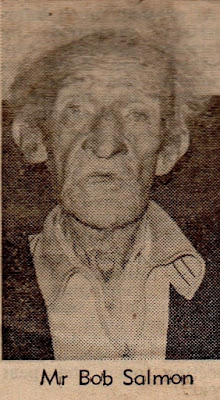 When an elderly man or woman loses a life partner it can be a traumatic experience and leave a gap difficult to fill. One man helped overcome his loneliness after his wife died about seven years ago (1973) by taking up a hobby he had first been interested in when at school.

This may not seem so unusual but the man in question, Bob Salmon, was in his late seventies when he began his hobby, painting scenes remembered from years gone by.

Bob has no artistic background and is the son of a teamster from Broken Hill and one of eight children. Bob Salmon arrived on the Eastern Goldfields with his family in about 1899 when he was 3 or 4 years old, and settled in Kamballie, a suburb of Boulder.

He attended school there and was always good at his copy-book work. At the age of 13 ½, he gave up his studies and went to work.

His first job was selling scheme water to the water carters from a stand-pipe near the Westralia Block Hotel. He had to turn the taps on and off and collect the money from the water-carters, four in all, and hand it in weekly to the man in charge of water in that area

The price of water then was ten shillings for 100 gallons. This was before·the reticulation scheme went to Boulder. Bob received two pounds a week for his services.

He had some spare time on this job and earned another 12 shillings a week for helping the barman at the Westralia Block Hotel make lemonade for half an hour each day.

The local postmistress, Mrs Lay, who had lost her legs in a train accident and got around with two cork legs, also employed Bob. She paid him I7 shillings and sixpence a week to run the mail twice a day from the post office to the Kamballie railway station.

After a year or so at working at his three jobs, young Bob Salmon gave them up and worked full-time at Armstrong's Cycle Agency in Kalgoorlie.

Other jobs followed and then in 1929, he went to work on the Transline as a maintenance man. He worked on the line until 1942. During that time, at the age of 37, he married an Adelaide girl and took her to live in little settlements on the Transline. The couple had no children.

Bob Salmon used to read Smith's Weekly and one day before he was married, he saw a drawing in the paper with the caption underneath, "Draw me and win £10”. He sent in an entry and the editor wrote and told him that although he had not won the £l0 he was entitled to twelve months free tuition by correspondence from an art school in Sydney.

Although Bob completed a couple of lessons, he found he could not manage the course. He said, "I was working so hard and it was summertime and 110 in the shade. l was loading rails and sleepers all day and coming home dead tired and having to cook my own tea, so I gave it away. Since then I've had several goes at doing bits of sketches, but something always seemed to stop me, so I said to myself, 'Forget it.' ".

"This was until my wife died, then I thought I'm going to be in a pretty bad state of affairs if I don't do something', so I started painting and went mad on it and painted every day for months."

His paintings were mainly of incidents or scenes he remembered of his younger days. One, possibly his favourite, depicts the old suburb of Kamballie where he used to live. That painting now hangs in the Boulder Tourist Bureau (1980).

Other favourites of Bob's are of Jack Botica, the "Gun-cutter" of Lakewood (he used to cut eight tons of firewood a day with an axe); the Goat Garm at Somerville (one of Bob's brothers, who used to cart many tons of firewood daily by horse and dray from the railway trucks on a spur line at Kamballie to the boilers at the Great Boulder mine); and his latest painting, a scene with the water-pipeline m the background.

Bob Salmon enjoys painting and although he believed some of his work looked "real nice" he did not expect anyone else to appreciate what he did.

One day he met a geologist, Sue Smith, and when she saw his paintings she recognised their worth. The paintings were lying around everywhere, even scattered on the floor, but Sue gathered some up and took them along to the Golden Mile Gallery.

Last year, an exhibition of his paintings was held in the gallery. Some are still there (1980) and were among the paintings recently examined by an art critic from the Perth Museum and Art Gallery.

The critic was impressed with Bob Salmon's work as a local folk artist and said that some of his paintings were much superior to at least one of the same type acquired by the Perth Art Gallery not so long ago for a very big sum of money.

While Bob is not averse to the idea of - making money from his paintings, his main motive is for the pleasure, it gives him. He plans to go on painting scenes from the past for as long as his health allows.

Does anyone have one of his paintings or more information on Bob Salmon? Please comment below. Published in THE KALGOORLIE MINER - WEDNESDAY, JUNE , 18, 1980 p2
Email ThisBlogThis!Share to TwitterShare to FacebookShare to Pinterest
Labels: Norma King Article