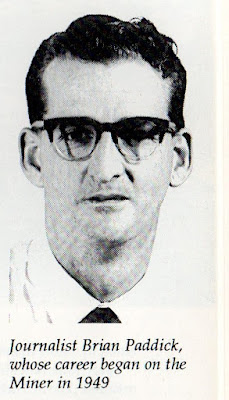 Brian commenced work on the "Miner" on 6 December 1949 - the day his sister Beryl was born. He left the Miner on 6 February 1966 - decimal currency changeover day.

Below are some choice snippets of this letter.

"Goanna" Jack Pettit published "Saturday Night and Sunday Morning" and "Random Reflections" columns for many years. Humour was the dominant theme and few escaped Jack's pen. "Goanna" frequently made mention in his columns of one of the characters of Kalgoorlie - Jack Dando. Jack had a raucous voice and a louder whistle. He drove the "dunny cart" or "night cart" (for those of you too young to know, prior to sewerage in Kalgoorlie, houses had an outside toilet and the dunny man would access them via the back-lane every night to remove the day's waste).

One day, Dando was taking the night cart back to the council yard when he spotted Pettit riding his bike near the sanitary depot where Pettit had been mushrooming. He agreed to give Pettit a lift to his home in Campbell Street. He helped him load his bike on the council truck and they set off.

On passing Campbell Street, Pettit told Dando: "This is my stop, Jack - let me off!" Dando responded, "I've been waiting for years to get you Goanna", whereupon he drove into Hannan Street and proceeded up and down the main thoroughfare tooting the truck horn, whistling and shouting for all to hear: "Look who's riding in the shit cart now!", while an embarrassed Pettit could do nothing but ride it out and bide his time until he could have another shot at Dando through his column.

Bob was another of the 50s journos who covered his "rounds" on an old Indian motorbike with hand gear change and sidecar. He was also involved with the Citizens Military Forces and spent most of his spare time chasing bees. Whenever he spotted bees, he wasn't happy until he located their hives to help himself to the honey. He later joined the Department of Agriculture.

John was one of the subs of the 50s and later became chief cable sub on the West Australian. I remember Doogie pinning a custard tart to the wall of the teletype room as a warning to one and all not to purchase goods from a certain shop close to the office. It was stale when he purchased it and it hung on that wall for years.

Probably the best-known of the journalists from Kalgoorlie of the 50s and early 60s. He later became editor of the West Australian and editor of the Sunday Times. Don covered everything, but perhaps his best stories about DB Smith were those involving his "off work" escapades, in particular with his mate, butcher Harold "Haz" Jarvis.

Each year, a few days before Christmas, the "Miner" held a party for the night shift when all the workers gathered together to share a couple of kegs. I recall one of those nights when Don and I were last to leave around 4 am and a little worse for wear. We were reluctant to go as a five-gallon keg had been tapped only an hour earlier and there was still at least half of the keg left.

Smithy came up with the idea of storing it in the cool room of Mutzig and Jarvis' butcher shop, which was only a few doors up from the "Miner". "Haz" was always the first at the shop as he had to make the days' sausages and so we nabbed him as he rode his bike up the back lane and talked him into our plan.

We re-surfaced for the day's duties about midday and after a few hours toil decided to seek a 'reviver' when the butcher's shop closed. We met Eddie Mutzig and Frank Jarvis as they headed for the Criterion after closing the shop and they both declared that the could not understand why "Haz" appeared to be getting "pissed" when he hadn't left the shop.

Too late - by the time we found Haz, he was parked under an empty keg in the cool room.

The Christmas period was also noted for some of the traditional events of the printing industry, dating back to England.

There was the Miner's annual "Wayzgoose" picnic when staff and families joined together at the Kalgoorlie racecourse for a day of fun. Father Xmas gave gifts to every child and there were races for the kids and adults as well as copious amounts of food and drink.

The Wayzgoose dated back to the times when the printers drove flocks of geese through the streets of a town as a prelude to a feast for their families.

Likewise, at midnight on New Year's Eve, the staff at the office would grab hold of times or anything that would make a noise to "beat out the djins" or the mischevious devils which inhabit a newspaper office and which can cause those unexplained disruptions to equipment and machinery.

Jack Hocking would then reward all involved by inviting them to the Tattersalls Club behind the "Miner" office for two drinks, but then it would be back to work until 3 am or later.

It was really a family atmosphere in which there was little or no snobbery. Journalists mixed with the linotype operators, the compositors, printers and publishers.

If anyone was sick or perhaps a staff member had become a father, Jack would have a bunch of roses from his garden. Jack was a garden fanatic and was the judge of the various flower shows run in Kalgoorlie and boulder.

Frank Cressy, who replaced Ken Loukes as "reader" in the 50s, was another character. I recall one night helping out in the reading room when I came across an item listing all those who had been arrested for illegal bookmaking - in those days the charge was "Obstructing the traffic" for which a $10 penalty applied.

As I read out the list, Frank's name came up and I gave no hint of recognition, neither did he. However, as soon as we finished he walked out into the comp room, picked up the metal containing the item in which his name was mentioned and dumped it. It was one occasion when a list of illegal bookies missed print.

A Lady's Letter" carried the social notes of almost every event on the Goldfields on the Friday edition. The page carried every conceivable piece of local gossip, from the winners of bridge night at All Hallows Church to the lengthy description of the dresses worn by young ladies a the debutants balls.

Reading the page was a bit of a nightmare for the reading room where lino operators occasionally dropped the letter "r" from the word shirt.