Eva Bensley Reminisces - A German Family in the Goldfields during WW1 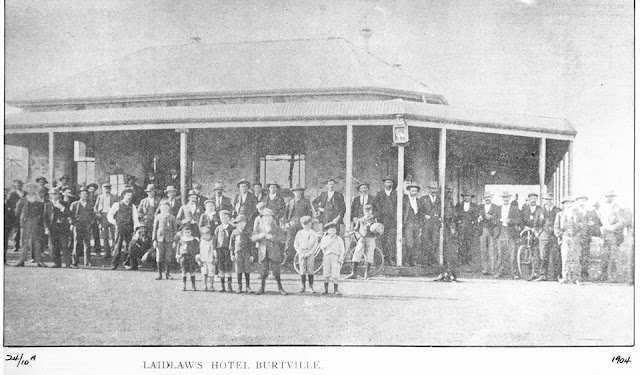 The following article was written by Norma King based on interviews she had with Eva Bensley. This is the first time it has been published.
My name is Eva Bensley and I am ninety-one years old. I was born on the 3rd of June 1897, in a little hut with hessian walls and a tin roof on one of the leases down Trafalgar way. My father came over from Queensland and my mother came afterwards.
In 1896 the train only came as far as Coolgardie and then that year Mum got married in Coolgardie on the 22nd of August. She went up to Kalgoorlie or Boulder, they were all tin places you know. Then my sister, Kate, was born a year or two later.
My mother had friends; they were all German friends as my mother came from Germany and my father, too. His name was Johan Tronks. We used to walk into Boulder on Friday night. A band used to play. It could have been the German Band. My father worked on the Great Boulder mine for a while. He was firing the boilers. He got sick of stoking the boilers as he called it and wanted to go out bush. I was four and my sister was two.
I don't know how we got there, the train only went so far, then we had to go the rest of the way by coach. We went to Laverton and then after that, we had to go eighteen miles to a place called Burtville. There were all horses and carts; there were no cars. Dad had a little humpy place built for us and a big bough shed. Mum had a few chooks.
The Aborigines used to come and visit us and my mother would feed them. They wanted flour and it had to be self-raising flour, they wouldn't take plain flour. They would move away a little and light a fire and mix flour and water and cook it on the coals. When one came with a piccaninny she would ask my mother to give the baby a name. They never stayed long.
Dad went prospecting for a while but he never did any good. Then we went further towards Burtville. It wasn't much of a town. We lived a couple of miles out and we had to walk to school. The school was a little mud hut. There had to be ten or twelve children before they would send a teacher out. There was only a dirt floor with bags on it. Then they built a big hall and we used to get taught there. They used to have dances and that there. Then after a while, we got an English teacher, Mr Revell. He was very nice, very strict. He would say, 'Sit up straight and give us a thump on the back. At playtime, the boys played marbles and the girls played jacks.
We had a big, white dog and it would walk with us to school every morning and wait all day and walk home with us again. We were a couple of miles away from school.
Our food was mostly in tins- butter and cheese. A German baker at Burtville made bread every day. It was all we had fresh. By the time our food arrived at Burtville from Laverton the butter was all oily. Later, the baker moved to Laverton. There was no telephone between the two towns and if anyone got sick someone had to go to Laverton to bring the doctor out.
There were two pubs in Burtville and one shop that burnt down. They reckon he did it on purpose. There was another shop, a post office, a bank, a butcher shop for a while and a police station. There were a couple of other shops there but they were shut. There weren't too many houses. They were made from mud brick or hessian and tin. Father built us a new house a bit closer to the town. He made it from hessian and iron. It had four rooms, one bedroom for my sister and me, another for Mum and Dad, a kitchen and a little dining room. We had candles, lamps and lanterns. There was no electricity.  You always knew when there was a dance on. You'd see people carrying hurricane lamps going along a bush track toward the hall.
Before the hall got built, they used to dance in a billiard room at one of the pubs. They'd put the billiard table outside. There would be accordion music. They got a piano when the hall was built. Children went along to the dances also, as they couldn't be left on their own. Then my mother had another daughter called Amy. I was fourteen years older than her.
I left school when I was sixteen and then I went out to work. I worked at the Black Swan hotel for the owner's wife, Mrs Sangster. There was another hotel on the corner. It was made of brick. Mrs Sangster did the cooking and when she was cooking she was in a bad mood and I tried to keep out of her sight She had a big black stove with an urn full of water on the top. Mr Sangster looked after the bar and did anything else that was needed. We had water from the windmill, which wasn't very good. It didn't rain very often and when it did we used to put all the tubs and pots and anything else we could find to catch the water. 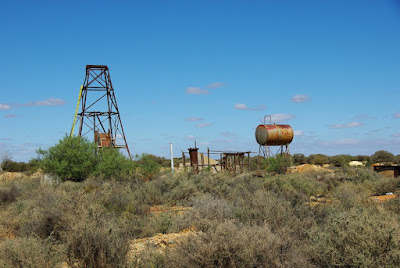 Burtville. Photo by L Stephen: https://www.exploroz.com/places/61295/wa+burtville
We then went to a little place called Ida H. It was halfway between Burtville and Laverton. It was a bigger place than Burtville. I worked at a boarding house there. It was owned by Mrs Taylor. There were two boarding houses there. Then a lot of the boarders left and went to work in Kalgoorlie or other places and the boarding house closed down.
I then worked at the other boarding house. It was only a hessian place and was owned by Mrs Brown. She had a lot of boarders. Once a week another girl and I used to have to do the ironing after tea. We used flat irons, heated on the stove. There were lots of big, starched, white tablecloths. We used to iron sometimes until two or three o'clock in the morning. I got up at five o'clock and breakfast was at 6 o'clock. I had to cut the mens' cribs (lunches). We worked seven days a week and the only time we had off was for a little while after lunch. But we enjoyed ourselves. You've got to make your own enjoyment. We used to have parties and picnics and a dance on Saturday nights. That's all there was. Everybody joined in, even the mine manager and his wife and the accountants or whatever they were; they all joined in, too.
I was eighteen when I was at the Ida H. Mr Crews had the hotel there and later went to Kalgoorlie and took over the Foundry Hotel. Then war broke out and spoiled everything. My father was interned. He was put in a camp in New South Wales. My father was a quiet, clean-living man. Then our family shifted into Laverton. We were treated terribly. Mother couldn't get a job for a while then she got a job in the hospital at Laverton. They'd say, 'She's German, she's a square head.' There were no pensions. My younger sister went to school in Laverton and she got hauled over the coals too.
I worked in a private house for one pound a week and other places, including the boarding house at Lancefield. There was an English chap there who wore silk shirts and was all dolled up. One day when I came out of the kitchen he called me a German bastard. There was a flour bag near the door we used as a mat and I picked it up and threw it at him. I had to do something; I was that annoyed. He was covered in flour and dirt and complained to the boss, but she took no notice of him. He left shortly after and went to Kalgoorlie or somewhere. Then Father came back after the war and got a job on the Lancefield Mine, out of Laverton. Then that shut down and we all packed up and went to Kalgoorlie. He got a job on the Lakewood Woodline. That was in 1920.
The people who helped put my father away, the shopkeeper, Tom James, Bob Sangster, who had the hotel and the policeman; they all fought between themselves. The policeman shot Tom James and Sangster poisoned himself. That was after the war while we were in Laverton. So no good came of them. When we moved to Kalgoorlie we lived at Trafalgar (a suburb).
(A report on the murder can be read on Trove: https://trove.nla.gov.au/newspaper/article/92882483?searchTerm=tom%20james%20shot&searchLimits=l-state=Western+Australia|||l-title=342)
I met my first husband and was married in Laverton. His name was John Legge. Then the gold tax came in and the mine closed down, and many shops closed. You couldn't get any credit unless they knew you.
My husband had silicosis. We went down to Esperance to live to help him get better but it didn't do him any good and we went back to Kalgoorlie where he died. We then went back to Esperance to live. I had four children, two girls and two boys and they all went to School in Esperance. I worked at the hospital.
I married again when I was seventy-three. We were married in the Little Sisters of the Poor in Kalgoorlie where we were both staying. We were together for four years before he died. I left the Little Sisters and went to one of the Pensioners Homes in Boulder Road. My sister wanted me to go and live with her in Armidale and I went and I stayed there for three or four years. Then I went to one of the units in Muschamp Village in Wilson Street. It is very nice there and I have been there ever since.
All the people I knew have passed on and I have no one to visit me or anything. I just sit down all day and do crossword puzzles. The happiest times in my life was when I was working. I love working and I also love walking. I often go for a walk. I have had a hard life but taken all round it has been a fairly happy one.
Email ThisBlogThis!Share to TwitterShare to FacebookShare to Pinterest
Labels: Norma King Article