The Residents of 40 Piccadilly St Kalgoorlie, Pt 3: The Egglestons

The next owner of the house was an accountant, Charles Murray Eggleston. He married a school teacher named Mary Ursula Darcey in Coolgardie in 1900. The were both originally from Victoria. Charles was most likely working for H D Pell at his auction mart in Coolgardie and moved to Kalgoorlie when the business was moved there. Pell's Open Call and Auction Mart was situated in Hannan Street and was destroyed by fire on 26 April, 1901 along with other businesses.

Charles Eggleston most likely rented the Piccadilly Street property from the Janeczeks for the first four or five years and purchased it in April 1905 when the property, which was now freehold, was transferred over to him.

The Janeczeks had earlier erected a bough shed in front of the original house. The bough-shed was circular and had a 'granoloithic floor'. The roof, instead of being flat like the usual bough sheds, was built something in the shape of an open umbrella, similar to the roof of an African kraal. The only similar gough shed in Kalgoorlie-Boulder at the time was the one described in the book, Those Were the Days, as "the Brookman and deRose camp at the Great Boulder Mine".

The photo below is the original house before the bough shed was built. Andrew, Elizabeth and their son Dominic Janeczek are on the verandah. 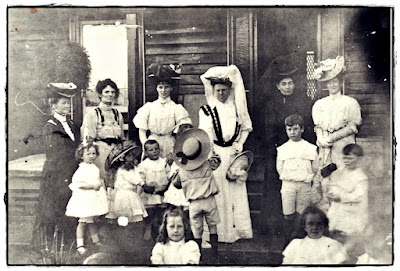 They named the house Ellimatta, meaning 'my home', The outside walls were constructed of weatherboard and the roof of corrugated iron. The inside walls were lined with a flat iron, the ceilings with stamped patterned iron and there was a bull-nosed verandah at the front. The house had four rooms and a cellar at the back. Mrs Gilbert, who had moved to Piccadilly Street in the early 1940s, described the house as it was when she first saw it. The front verandah was covered with creepers and there was a palm tree in the front yard.

Minnie Eggleston lived a fairly social life in Kalgoorlie. She was a guest at an "At Home" at the Hocking residence, which was situated only a few doors down the street on the corner of Piccadilly and Maritana Street. Mrs Hocking was the wife of the owner of the Kalgoorlie Miner and only invited 'the right type' of people to functions. In 1910, the frock she wore to the Kalgoorlie Cup was described in the Kalgoorlie Miner as being made of paisley muslin "with touches of brown, and a paisley hat with forget-me-knots and little roses". Her son was dressed as "Madame Melba's jockey" at the Rose Ball.

The following year, on August 1, it was reported that she had entertained 40 guests at Albany Bells Tea Rooms in Hannan Street. She was leaving for Perth that day with her son, en route for the Eastern States. She was not expected to return until the end of summer. There were musical items, recitations and memory games. After finishing their morning tea, the guest of honour was presented with a handbag, and her son Frank was given a 'beautifully bound Holy Book.".

Later that year they transferred the property to a butcher, Edward Willis, and moved to Perth.

The Eggleston family would have seen a lot of changes during the years they were in Kalgoorlie. By the time they left, there were a large number of brick and stone buildings in Hannan Street and most of the town was lit with electricity. Freshwater from Mundaring Weir was piped to the Goldfields, trams linked Kalgoorlie, Boulder and the suburbs. There was also a new hospital over the road from their house, replacing the original row of tents and canvas buildings.

The Eggleston family settled down in Perth, where Charles worked until the age of 85. He worked as an accountant, auctioneer, antique dealer and as a furniture manufacturer in Hay Street West.

Her activities have been many and varied, and mostly in the interests of country women and children. Mrs Eggleston was for ten years the Interstate Secretary of the National Council of Women, is a member of the Wooroloo Welfare Committee, Social Secretary of the W.A. Historical Society and honorary treasurer of the West Australian Women's Club.

Being intimately in touch with overseas settlers in this State, she is entrusted by the Council of the Overseas Settlement of British Women, London, with the welfare and repatriation problems of women settlers and reports on the causes affecting them. Another association which depends on the knowledge and help of this very busy lady in the Kentish Association of Empire Settlement."