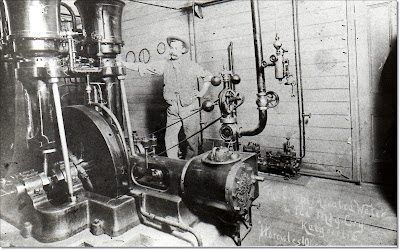 Andrew Janeczek attended the Alderdice auction sale in Kalgoorlie in 1896 and successfully bid for 40 Piccadilly Street, Kalgoorlie. He registered the property in the name of his wife, Elizabeth. Andrew Vincent Janeczek and his brother John had arrived in Australia with their parents from Poland in 1877. Andrew had an older married sister in Bremen, Germany. She migrated to Australia in 1882 with her husband and young son. Andrew's father had been an officer in the Polish Army. Andrew's niece, Mrs Cath McKinnon, said he migrated due to a desire to "save his sons from the wars there". The family settled in Adelaide where the father set up a business in Franklin Street as a licensed distiller. He was only there for a short time when he died. Andrew took over his father's business and then went on a world tour. While in Ireland he met and married Elizabeth Landvoght. The couple was barely 20 years of age when they married. Their son, Dominick was born in October 1882, the year that Andrew was naturalised. 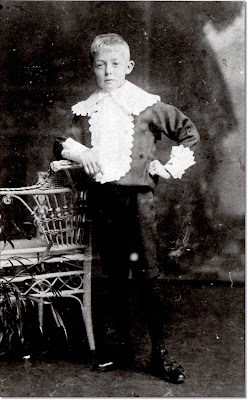 Soon after gold was discovered in Kalgoorlie, Andrew left Adelaide and came west to the new goldfield. His widowed mother moved to Sydney to live with her son John. It is not known whether Andrew's wife and son travelled with him or joined him after the railway reached Kalgoorlie in September 1896. Andrew did very well in Western Australia. An article in the Western Argus (10 November 1898) titled "A Leading Goldfields Concern" detailed his business successes: "Mr Janeczek has been associated with Eclipse success since the early pioneering days. First, he introduced an 'Eclipse' dry-blowing machine, then he was fortunately associated with an 'Eclipse' mine and now he manages the Eclipse Aerated Water Cordial and Ice Manufacturing Company. ... From a modest beginning in a shanty of hessian and bush timber, the business has extended concomitantly with the growth of the business till now a quarter-acre block [from Porter through to Egan Street] is occupied by buildings sheltering many thousands of pounds worth of machinery. In the fall season about 30 hands are employed and four delivery turnouts, besides other vehicles, are kept busy travelling about." The article gave more information about the factory, stating that only distilled water was used to make the ice and cordials. There were also special cool rooms, where "storekeepers, such as fishmongers, butchers and fruiterers, could store their perishables" for a fee. In 1886, Andrew owned the original cordial manufacturing with Mr Troutman as a manager, and "Successfully promoted the formation to the present company which was formed with local capital and with Mr Janeczek as managing director." 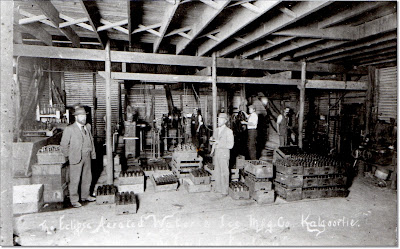 Andrew on right at Eclipse Aerated Water & Ice Manufacturing Co. Photo courtesy of Eastern Goldfields History Soc, 188/24
In another publication called Mundaring, a history of the area, there is a reference to another project involving Andrew. Part of this history reads:

"Matheson Harry Jacoby exercised an extraordinary influence on the subsequent development of this district. He actively encouraged the acquisition of orchard properties by a number of wealthy Goldfields identities. Among those for whom he acted as an agent was Andrew Janeczek of the Eclipse Aerated Water and Cordial and Ice Manufacturing Co. Ltd of Kalgoorlie who successfully established his 'Orchard Grove' orchard south of Mundaring in 1897."

The land required clearing and as this was a time-consuming and labour-intensive task, Andrew invented "The Janeczek Stump and Tree Puller" which he patented in 1899.

It appears the family was still living in Piccadilly Street that year because on 5 January 1899, there was an article in the Kalgoorlie Miner that said that Mary Riebe, a young woman employed by Mrs Janeczek, had been in town doing some late night shopping and on her way home to 40 Piccadilly Street, a man jumped out of a dark corner and knocked her down forty yards from her destination. She screamed and the assailant ran off. Although she received only slight injuries, she suffered severe shock from the incident.

A small item in the Western Argus on 26 January 1899, shows that Andrew was involved in another business venture in Kalgoorlie. The article reads, "Fire threatened Mr A Janeczek's new hotel now in course of construction on the corner of Maritana and Bourke streets". (the Tower Hotel?)

Sometime after 1899, the Janeczek family moved down to their orchard property in what became known as Janeczek Road near Mundaring. The couple did a lot of entertaining and Andrew was involved with civic affairs at Mundaring. He was also one of the co-founders of the Darling Range Horticultural Society.

In 1918, Andrew was admitted to the Wooroloo Sanatorium with tuberculosis. He died a few months later. After his death, Elizabeth sold the Orange Grove property and returned to Kalgoorlie. She lived with her sister until her death in 1924. The two women were related to an early and popular publican, Paddy Whelan, and they were very socially active. Paddy was the licensee of the Shamrock Hotel at this time.