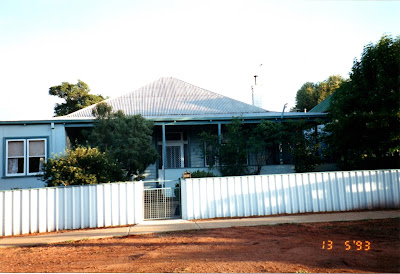 Gold was first found in Kalgoorlie (then known as Hannans) in June 1893. By 1895, Kalgoorlie had become a municipality. The first streets surveyed in April 1894 were Hannan, Wilson, Porter, Egan, Brookman and Maritana.

The blocks in these streets were auctioned at high prices and the first businesses there were constructed on hessian and corrugated iron. There were many requests for cheaper blocks for miners who were still living in camps and tents. The government then surveyed residence areas. The first 26 surveyed blocks were north of the town at what was then known as Piccadilly. These residence blocks were available to anyone with a miner's right and for a yearly fee of one pound. The leaseholder was expected to build improvements on the property within a year. If no improvements were made, the lease was forfeited and given to someone else.

These blocks were placed under the care of the Kalgoorlie Roads Board by the end of 1896 and around 1900 the enlarged residence area in Picadilly became part of the Kalgoorlie Municipal Council. The leaseholders could then purchase the freehold of their property for twenty pounds with yearly rates.

James Gordon Alderdice leased Residence Area Lot 6 (40 Picadilly Street) in September 1895 with his wife Margaret. He was a businessman and she was the first unofficial matron of the Government tent hospital.

Unsanitary conditions in the Eastern Goldfields in the early years led to many cases of typhoid fever. In late 1894, at the approach of the second summer in Hannans, responsible citizens formed a Progress Committee. This was in an effort to both change the unsanitary habits of the miners and to persuade the Government to provide them with hospital tents.

The Government agreed, but the tents were mislaid somewhere at Southern Cross. On 8 December 1894, the Committee called a public meeting and established a temporary hospital the same day. This 'hospital' was a hessian building in Hannan Street, loaned by Mr W G Brookman. A builder, Mr McCreede, erected some bunks inside and Mrs Margaret Alderdice offered to nurse the patients.

Mrs Alderdice, Mesdames Heale and Mrs Roberts had been visiting sick men in their camps and did all they could for them. The Committee employed ex-army sergeant A Purcell, as wardsman and arranged for Mr E H Lewis to provide the patient's medication. Mr W Downey was employed as Secretary and Dr Martin as the hospital's medical practitioner.

By the time the tents arrived at Hannan's the patients had been moved into another hessian building, erected on the hospital reserve by those who agreed that the main shopping centre was not an ideal location for typhoid patients.

During the next Progress Committee meeting, it president, Mr John Wilson, complimented Mrs Alderdice "for the many kind things she had done at the hospital". Dr Martin added that they were most fortunate in having her as Matron as "she was quite aware of her duties and would do the washing and cooking ... The patients were not always clean, and Mrs Alderdice had washed them and changed their linen.

Margaret Alderdice managed the hospital for almost a year and during that time there were a few changes. The canvas hospital had grown and extra staff were employed. However, the first trained member of staff, Nurse Agnes, resigned after only one month. She objected to taking orders from an unqualified matron.

Around September 1895, Mrs Alderdice received an abrupt letter from M A H Bartlett, the second secretary of the hospital, informing her that the Committee intended employing a qualified matron and after October 1895 her services would no longer be required.

Margaret's husband, James Gordon Alderdice, was generally known as Gordon. He arrived in the Eastern Goldfields from Sydney in 1894. He was one of the early gold-seekers at Hannans. In partnership with Luke Geohegan, he sold condensed water in Hannan Street. During this time he was noted for having rolled a large barrel of water from a lake south-east of Boulder to their stall a few yards from the Australia Hotel. There were no roads between the lake and the town. He did this as they were unable to hire or obtain one of the few vehicles in the area.

Their next venture was the Black Swan Wine and Beer Saloon in Hannan Street. They built this not far from their previous water stall.

Margaret joined her husband six months after his arrival on the Goldfields and moved into the newly built house on Residence Block 6. There were there for about a year when they decided to sell up and return to the East. On August 1896, Mrs Alderdice placed a "For Sale" notice in the Kalgoorlie Miner:

"G.T.Beel and Co. Ltd have been favoured with instructions from Mrs Alderdice, (on account of her early departure to the Eastern Colonies) to sell by auction on the premises that splendidly situated block of land being the very pick of sites in Kalgoorlie and known as Residence Area No. 6, containing a quarter of an acre, all fenced with 2 wires ...

Improvements consist of one -well built Canvas Dwelling, with elevated galvanised Iron roof; two capacious rooms, line and ceiled; large galvanised iron kitchen at back. On this allotment, there are also two well built hessian buildings in perfect order making one of the most complete and tidy properties in the district."

They were away from the Goldfields for around six months. They returned to Kalgoorlie and took over the license of the Universal Wine and Beer Saloon, which later became the Criterion Hotel. In November 1898, Gordon began his three-year term on the Kalgoorlie Municipal Council. In June 1901, Gordon and Margaret left Kalgoorlie for the gold-mining town of Gwalia. Before they left they were presented with a silver tray and a purse of sovereigns.

Gordon worked at the Sons of Gwalia Mine for twenty-years. He died in 1923 and was classed as the oldest employee on the mine. It was reported that the catering of a function at the mine was undertaken by him, so he was either in charge of the mining mess or head cook. 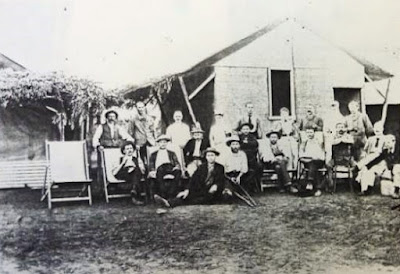